The year 2012 saw the release of Kingdoms of Amalur: Reckoning, an epic, sprawling role-playing game which nonetheless is one of the most notorious video game flops of all time.

This is because despite it selling more than 1 million copies back in the day, it failed to turn enough profit to keep its development company 38 Studios afloat, which had to close its doors seemingly taking the Kingdoms of Amalur franchise down with it…

Thankfully for Amalur fans, though, THQ Nordic bought the rights to Amalur in 2018, meaning that a remaster, remake of even a sequel had become a possibility, bringing a smile to the face of all those who enjoyed Kingdoms of Amalur: Reckoning all those years ago.

And now we know it’s a remaster of the 2012 game we’re getting this year, plus some new content in the form of a new expansion for the game titled “Fatesworn”, the details of which have not yet been revealed by THQ Nordic, and which is coming next year.

Kingdoms of Amalur: Re-Reckoning (the name of the remaster, see trailer above) will be hitting shelves this September, and features improved graphics and gameplay. The remaster includes all the areas seen in the original game, including the city of Rathir and the Brigand Hall Caverns dungeons. Its high fantasy world has been compared to that of role-playing classic The Elder Scrolls IV: Oblivion, which makes sense taking into account that Oblivion creator Ken Rolston was involved in the game’s development, and so was renowned novelist R.G. Salvatore.

The game will launch this September for PS4, Xbox One and PC (Steam).

There will be three different editions of Kingdoms of Amalur: Re-reckoning available at launch

Video game company THQ Nordic has revealed the three different editions of the game which will be available at launch this summer. For starters, there’s the standard edition, which will be priced at $39.99 US dollars. Then there’s the “Fate Edition”, which comes in at $54.99, and includes the Fatesworn expansion which is releasing in 2021.

The highlight of the three editions is the Collector’s Edition, which is priced at $109.99 US dollars and comes with several physical goodies thrown in. These include an Alyn Shir figurine almost 21 cm (about 8.3”) tall. Alyn Shir is a female character who appears in the game.

You also get an Amalur keychain to put any spare keys you’ve got, plus composer Grant Kirkhope’s score for the game and original in-game artwork. Plus, it all comes in a high-quality box for you to drool at (see image below). 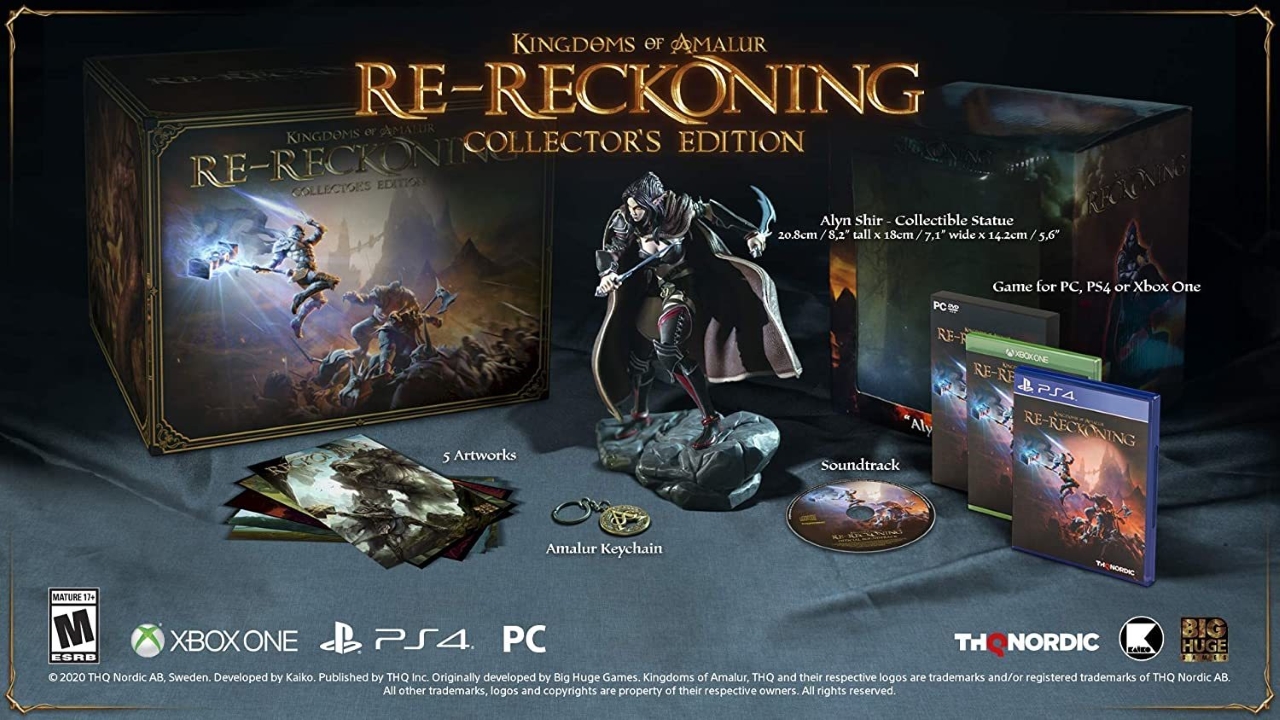 Kingdoms of Amalur: Re-Reckoning is a game to look forward to if you’re into epic fantasy RPGs and never got a chance to play the 2012 original, then. Meanwhile, fans of the original game looking to play through Kingdoms of Amalur again in remastered form will hopefully get a game matching their expectations when Re-Reckoning comes out this summer.

Note: Kingdoms of Amalur: Re-Reckoning will be released on September 8, 2020. Available on PS4, Xbox One and PC.