While the launch of next-gen consoles may have grabbed the attention of millions of people worldwide, PC gamers have also greeted the launch of new video cards by Nvidia and AMD with open arms.

Nvidia’s new GeForce 30 series of cards offer game changing performance according to reviews, even if admittedly AMD’s new Radeon RX 6000 series has emerged as a serious competitor to Nvidia.

But Nvidia may have a silver bullet to ward off the threat of AMD, and is expected to launch a powerful new mid-range card in early December to better compete with the “red team”.

This is none other than the GeForce RTX 3060 Ti, a card which according to leaked benchmark results could offer great value for money when it releases this year (the card is rumored to ship early next month).

The test rig featured an ASUS motherboard, 16 GB of high speed DDR4 memory and Intel’s top of the line i9-10900K processor. This is currently the fastest processor for gaming, and boasts 10 cores.

A slide sent to the press shows Nvidia’s own benchmark results for the RTX 3060 Ti, which comprehensively beat the earlier RTX 2080 Super in a series of games and rendering applications.

For instance, the RTX 3060 Ti delivers quite a bit more performance when it comes to ray tracing in a game such as Minecraft. Meanwhile, it also leads the RTX 2080 Super in more recent games such as Doom Eternal and Control (see below). These tests were seemingly done at 1440p resolution on a machine equipped with a non-overclocked i9-10900K processor. 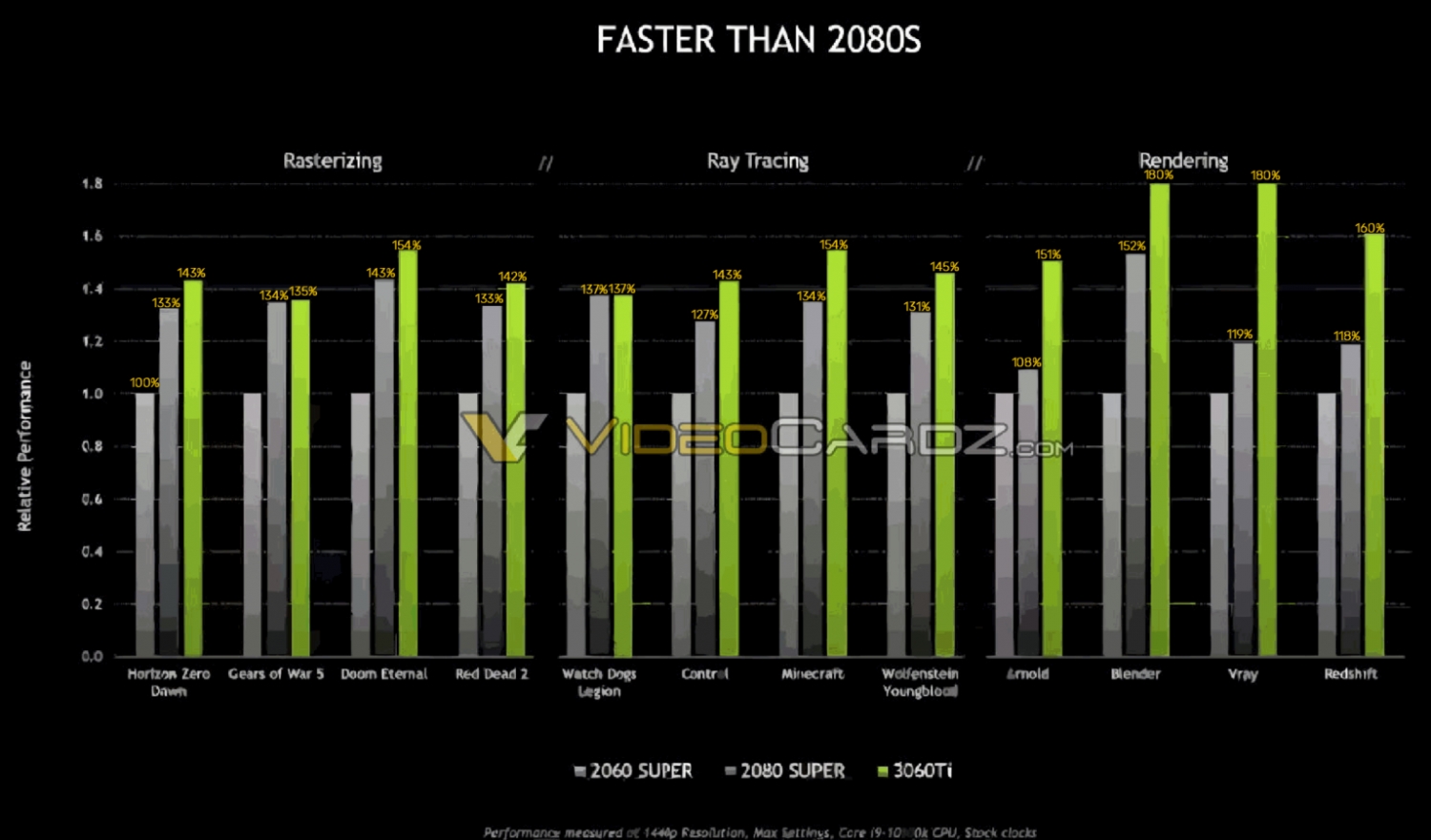 ADVERTISEMENT
So, do this leaked benchmarks mean PC gamers looking for a mid-range graphics card should now have the RTX 3060 Ti on their sights, and forget about the RTX 3070?

The RTX 3060 Ti is expected to go on sale at under $400 US dollars, while the RTX 3070 has a MSRP (which is the manufacturer’s suggested retail price) of $500 US dollars. But while the RTX 3060 Ti leaked benchmarks show what a great performer this new card could be, the RTX 3070 still is the more powerful card. It boasts more CUDA cores (individual processors which take care of graphics calculations) than its sibling, and  is also equipped with faster memory.

This means that the RTX 3070 could be a better choice when gaming at higher resolutions, and should be able to deliver better frame rates when running games at 4K, or with ray tracing on. Its higher CUDA core count and faster memory could also help make it more future proof.

But at a sub-$400 US dollar price, and if the leaked benchmarks are confirmed by independent reviews, it will still be hard to beat the RTX 3060 Ti, no doubt.

Of course, the RTX 3060 Ti is yet to be officially announced by Nvidia – everything about the card right now is all leaks and rumors. It shouldn’t be long now taking into account the card’s expected launch date of December 2, so it wouldn’t be surprising if Nvidia announced the GeForce RTX 3060 Ti to the world in the coming days.

Plus, there’s also the GeForce RTX 3060 and GeForce RTX 3050 Ti, more cards rumored to be coming from Nvidia in the coming months. This means more choice for PC gamers, and is surely something to look forward to as 2020 comes to a close.