As the clock ticks down to the release of Cyberpunk 2077, CD Projekt Red has been putting out new trailers aimed at showing off their upcoming video game, and to whet players’ appetites before Cyberpunk 2077’s December 10 launch date.

Aside from being one of the most eagerly anticipated games of 2020, Cyberpunk 2077 is also expected to be one of the best-looking of the year on both consoles and PC, and a great showcase for the new ray tracing effects which the more recent PC graphics cards are capable of.

Actually, Polish studio CD Projekt Red (the people behind the game) recently released a behind the scenes video showing off the game’s ray tracing effects. In it, the developers discuss how ray tracing enhances the game’s visuals, making Cyberpunk 2077’s Night City a more convincing setting.

An example of this is how CD Projekt Red have taking advantage of ray tracing to enhance the game’s shadows. “When you have the whole city, you see it through the horizon. And it’s all so complex. You have antennas, you have buildings, cars, people, everything is super busy. And normally, you need to do some shortcuts. And ray tracing is cutting the shortcuts. Everything is getting a perfect shadow”, said CD Projekt Red’s art director Jakub Knapik.

CD Projekt Red has also updated the PC system requirements for Cyberpunk 2077, as was recently reported on TweakTown. And sadly, those wishing to play the game on PC on the highest detail settings at resolutions above 1080p will be needing a pretty beefy graphics card to do so.

Actually, CD Projekt recommends a GeForce RTX 3070 to play the game on the “Ultra” graphics setting at 1440p resolution with ray tracing enabled. An even beefier graphics card (the GeForce RTX 3080) is recommended if you want to pump up the resolution to a glorious 4K with all the bells and whistles on.

So those wanting to see the game at its very best on PC will either need to own a beefy rig or be prepared to invest in one of Nvidia’s new series 30 graphics cards, specifically the RTX 3070 or RTX 3080, something which will set you back more than $500 US dollars. Note, though, that the game won’t support ray tracing effects on AMD’s new RX graphics cards at launch, meaning those wanting to play Cyberpunk 2077 with ray tracing on at release will need Nvidia hardware to do so.

If there’s a silver lining to the game’s updated system requirements, though, is that a relatively modest processor is needed to play on Ultra settings with ray tracing enabled. An Intel Core i7-6700 or AMD Ryzen 5 3600 will do for this according to CD Projekt Red. And taking into account that a newer processor like the mid-range i5-8400 outperforms the Intel Core i7-6700, it’s clear CD Projekt isn’t asking much when it comes to CPU power. You will need 16 GB of system memory or more in order to run the game with any form of ray tracing enabled, though, and 70 GB of SSD storage too. 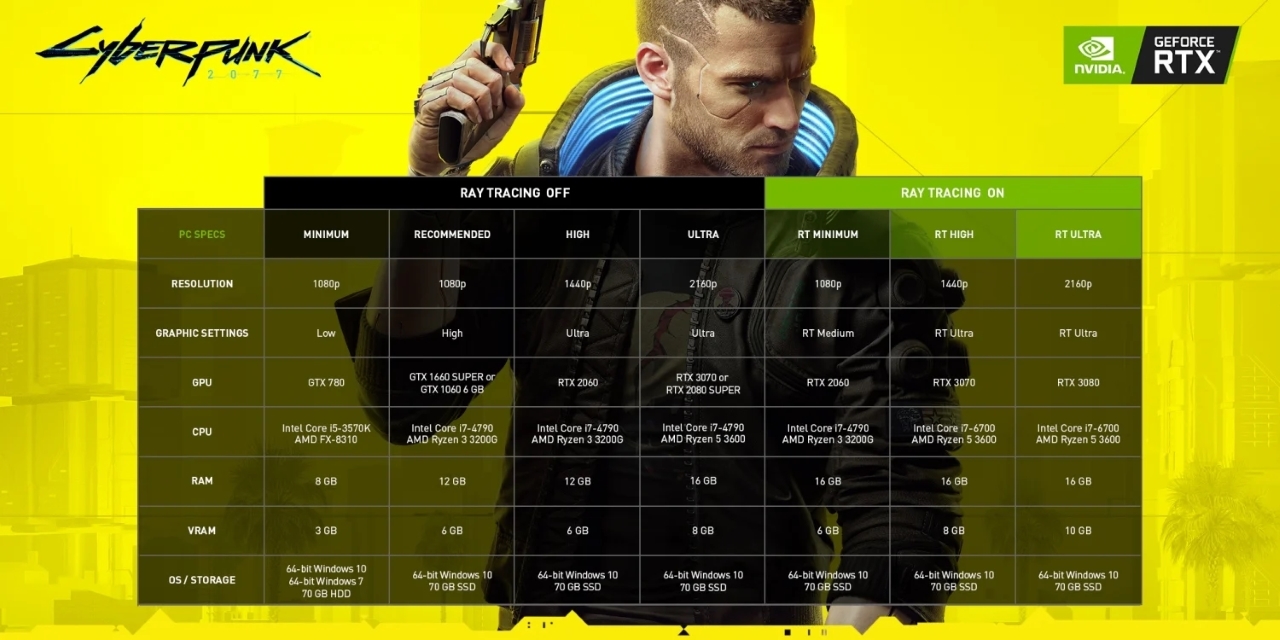 ADVERTISEMENT
That’s the high-end of the equation, and those content with running the game without ray tracing at minimum settings will be able to get by with much more modest hardware, obviously. All you need to get the game going at 1080p at the low graphics setting is a Nvidia GTX 780 or better graphics card, and an Intel Core i5-3570K or AMD FX-8310 processor coupled with 8 GB of system memory, as seen in the chart above, which shows the complete, updated system requirements for the game.

And given the fact that Cyberpunk 2077 has been delayed quite a few times already, we’re certainly hoping this will turn out to be the genre-defining game everyone is hoping for when it arrives on December 10 this year.

Read more: 5 reasons why Cyberpunk 2077 could be the best role-playing game ever

→
Next: Another of Hitman 3’s locations has been revealed