Life is Strange, an episodic adventure game released in 2015, became and unexpected hit that year, selling millions of copies and leaving fans hungry for more. And although it seemed for a while that those eager for more Life is Strange would have to make do with the upcoming TV series instead, developer DontNod Entertainment and Square Enix surprised everyone by announcing that a Life is Strange prequel was in the works, with studio Deck Nine taking the reins for this one instead of DontNod themselves.

So, now that Life is Strange: Before the Storm is with us, does this prequel to the 2015 hit get off to a good start?

The most significant thing you notice upon getting started with this Life is Strange prequel,  is the change of protagonist. Gone is Max Caulfield, the shy photography student and protagonist of the earlier episodes, with her rebellious teenage friend Chloe Price taking over here.

And truth be told Chloe is a good protagonist overall, although perhaps the games makers’ committed a sin by trying too hard to make her come across as a rebellious teen in the game. This means there’s liberal use of the word motherf*ck*r here, Chloe engaging in unnecessary high-risk behaviour (such as jumping off railroad tracks at the last minute), and a bit too many references to being “high”. 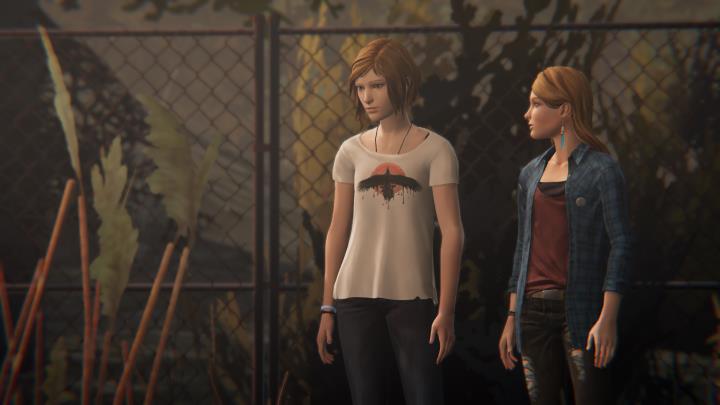 Rebellious teen Chloe (centre) is the protagonist in Life is Strange: Before the Storm.

Being the rebellious teenager she is, Chloe is also fond of painting graffiti at certain spots, and some of the game’s achievements are tied to this. This is a good replacement for having to take photos in the earlier Life is Strange episodes, and as an optional activity this turns out to be reasonably entertaining throughout the game.

Also, getting to read Chloe’s diary is a rewarding experience as was reading Max’s in Life is Strange’s first season, letting us take a peek into her rebellious teenage mind and discover her thoughts about other characters and the events which have taken place in the game so far.

Another significant change in Before the Storm is that you don’t get to rewind time here, unlike in the previous episodes. Of course, this wouldn’t make sense playing as Chloe (who doesn’t have Max’s superpowers), but thankfully the game makes up for it with an improved conversation system.

When you’re in a conversation with someone in Before the Storm, a blue icon appears next to a certain dialogue choices. This will let you take part in what the game calls a “backtalk challenge”. Here you have to pick the right choices throughout the conversation that follows, having a limited time to decide for each choice. If you do this right, you’ll get the other person to do your bidding – such as persuading a bulky bouncer to let you inside a nightclub, for instance. 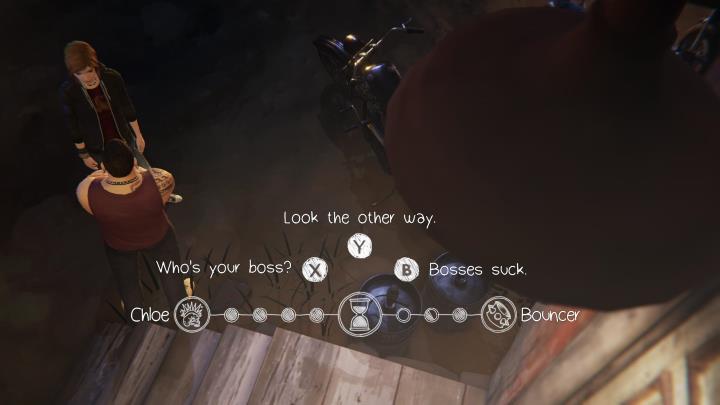 This nightclub is one of many locations you get to visit throughout this first episode of Life is Strange: Before the Storm, and it does look great. So do other in-game locations, such as the countryside and the familiar Blackwell Academy. Actually, this Life is Strange prequel ups the ante when it comes to visuals, looking quite a bit better than its 2015 predecessor.

Of course, this being a prequel to Life is Strange season 1, you also get to meet familiar characters from the previous episodes including Chloe’s mother Joyce, and her new fiancée David, someone whom Chloe has a love and hate relationship with as the troubled teenager is still struggling to cope with her father’s death in this episode.

It’s also interesting to see other familiar characters in a different light, like infamous bully and rich kid Nathan Prescott (who finds himself on the receiving end of the stick for a change here) and Victoria Chase, who thankfully doesn’t come across as an arrogant, snotty girl in this first episode of Life is Strange: Before the Storm.

Of course, this whole episode revolves around Chloe’s relationship with Rachel Amber – Blackwell’s drama queen and ace student who helps Chloe get out of a hairy situation early in this episode.

Actually, aside from protagonist Chloe, it’s clear Amber is the key figure here. It’s a good thing, then, that she comes across as an interesting character in this episode, and you get to know more about the mysterious blonde when she shares a train ride with Chloe later in the episode.

Nonetheless, the episode’s plot twist and Amber’s reaction to events at the end is slightly cringeworthy (teenagers causing forest fires never causes a good impression, not even in a video game…).

Aside from Chloe’s and Amber’s relationship, another high point in this episode is getting to take part in a role-playing game with two of Chloe’s Blackwell classmates. This is one pretty long and absorbing sequence which is almost worth the asking price of alone. And Chloe’s dream sequences sure are atmospheric, and help flesh out the story here too. 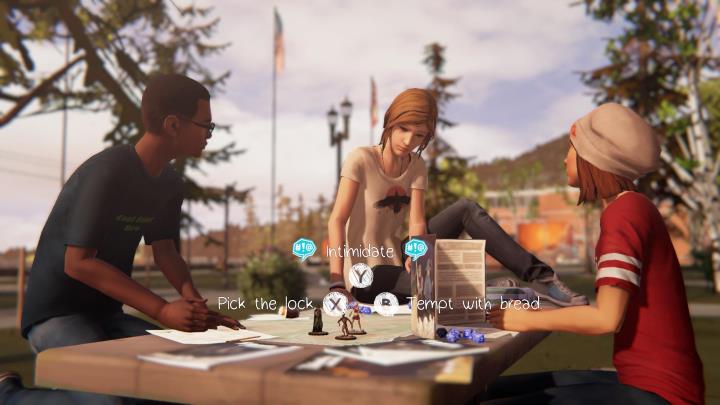 Taking part in a role-playing game with Chloe’s friends is one of this episode’s highlights.

However, aside from the not so great plot twist and some amusing scenes, not much happens in this episode. This makes sense taking into account that this is an introductory chapter and hopefully developer Deck Nine will likely have plenty more story to tell in the remaining two episodes.

Also, this doesn’t quite have the emotional impact 2015’s Life is Strange did, and there are a few weak lines in the script too (“I made this. For my MOM”, says Chloe of an ashtray resting on a shelf in her house).

Other aspects of the game such as the music are a mixed bag. While the title music is haunting and enjoyable, the songs are not quite as memorable as those featured in the earlier episodes.

Plus, there are few puzzles to solve here (and those are no more complicated than fetching one object to use with another), as this game is mostly about choices and consequences and having an effect on how things will play out with your dialogue choices.

Like in the previous Life is Strange episodes, at the end of this you get to know what percentage of players went for each of the possible choices available at critical points in the game, and it’s great to find out whether you picked the same choices as the majority did (or not).

So, despite the negatives, this is still an OK start to Chloe’s new episodic adventure, then. Life is Strange fans will want to pick up this prequel, if only to enjoy another adventure with their favourite characters from the 2015 hit game, while newcomers ready to jump into Life is Strange’s world will find this is a good starting point too.

Life is Strange: Before the Storm Episode 1 - Awake