If one thing is clear, is that Life is Strange caused a sensation back in 2015. This episodic adventure game had great characters, atmosphere and an intriguing storyline, so it’s not surprising it turned out to be a hit back in 2015. And while many fans of DontNod Entertainment’s game are anxiously waiting for Life is Strange 2, thankfully a prequel to Life is Strange (titled Life is Strange: Before the Storm) is now available for fans of the series to get hold of.

And although developer Deck Nine (who are behind this prequel instead of DontNod themselves) stumbled slightly with the first episode of Before the Storm, this second episode titled Brave New World surely is a match for the original Life is Strange’s episodes.

This is despite the fact that Brave New World is still not quite as emotionally engaging as Life is Strange’s first season was, plus there’s not so much mystery surrounding the events taking place in Before the Storm as in the original Life is Strange either.

This is because protagonist Chloe doesn’t have any superpowers like 2015’s Life is Strange protagonist Max Caulfield did, there’s no mystery surrounding a missing person here and most of the strange events seen in the first Life is Strange (such as solar eclipses taking place out of the blue) are nowhere to be found here either. Actually, this mostly focuses on rebellious teenager Chloe’s problems and relationship with Rachel Amber, a character whom she met in episode 1 and whom Chloe gets to know better in this second episode of Before the Storm.

Of course, being the rebellious teen she is, Chloe finds herself in trouble early in this episode, and has to face Blackwell’s stern director Wells in a slightly awkward scene where you have the choice of standing for Rachel, or let her take blame for their mischief in episode 1 depending on you conversation choices.

Of course, not having Max’s (the protagonist of Life is Strange’s first season) time-rewinding power, Chloe doesn’t have the advantage of foresight in conversations, but Life is Strange: Before the Storm “backtalk challenges” make up for this somewhat.

When engaging in conversation with another character in the game, some dialogue choices have a blue icon next to them, meaning that choice will trigger a backtalk challenge. This is like a verbal match with the other character in which you have a limited time to pick the right response. 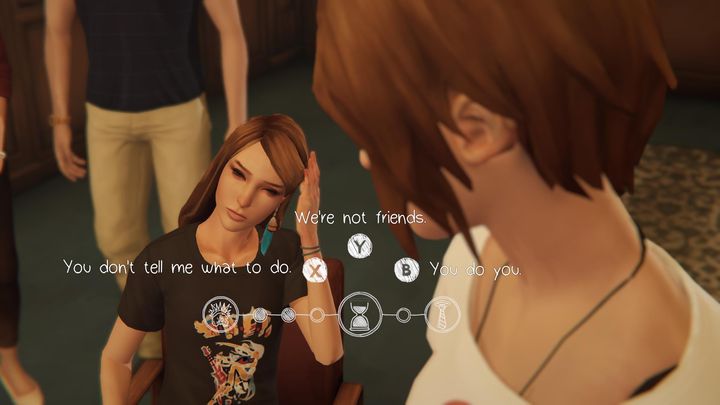 Backtalk challenges let you have the last word and get what you want in conversation.

If you do pick the right answers throughout, you’ll get the other character to see things your way – but the thing is that it’s not that hard at all to figure out what the right response is in these backtalk challenges, and sometimes the right choice is also underlined for you depending on whether you uncovered certain information before starting the challenge, making things even easier.

Overall, I found the original Life is Strange’s time-rewinding mechanic to be more satisfying in order to get your way in conversations, even if backtalk challenges are still quite entertaining in this prequel.

Aside from this, the game’s puzzles are not hard at all either, as these just involve fetching specific objects and using these were appropriate, there is nothing that will tease your mind here in the slightest. An example is having to fetch a pirate flag to decorate Chloe’s new car, for instance.

These fetch objectives are not boring as they give you a chance to explore the game’s pretty-looking locations, although truth be told Max Caulfield’s (the protagonist of Life is Strange’s first season) ability to rewind time in the first Life is Strange made solving puzzles more interesting in the 2015 game.

At least it’s easy to keep track of your current goal at all times here, as Chloe has it written on her left hand (you can press the left trigger button on the gamepad to view this), which is a nice touch.

Another thing that wasn’t so great about this second episode of Life is Strange: Before the Storm is the reuse of locations from the first season such as the junkyard, the Blackwell Academy and its surroundings, and the Academy’s student rooms.

It would have been nice to see more new, fresh locations in this episode such as the nightclub featured in last August’s episode, although there are still some nice new locations here like a theatre stage (and backstage too), and also the Amber home, residence of Chloe’s best friend Rachel parents. 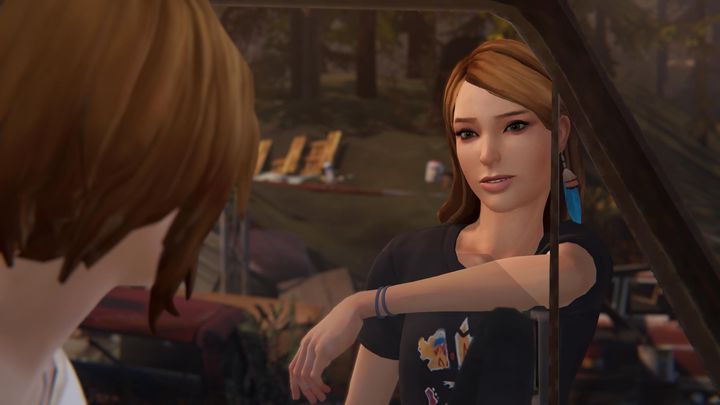 Like in the first episode, Rachel Amber (right) is a key character in this episode of Life is Strange: Before the Storm.

And the Amber couple surely is a good addition to Life is Strange’s cast, with Rachel’s father James being related to this episode’s big reveal. Actually, the Ambers are more interesting here than Chloe’s mother and her new fiancée David, who only appear briefly in this episode. It was also nice to see Principal Wells (the head of Blackwell Academy) again, although he doesn’t come across as a charismatic director here due to some stiff dialogue, and neither does Chloe’s mother boyfriend David, who also has some bad lines.

Other familiar characters such as a slightly weird Blackwell janitor seen in the first Life is Strange make a welcome return here, and it’s nice to see Victoria Chase (one of the main antagonists in 2015’s Life is Strange) return to her evil ways here, adding a little drama to the proceedings after not causing much of an impression in the first episode. Chloe will also find herself involved in some shady business as she tries to settle matters with drug dealer Frank (another returning character from season one), leading to some of this episode’s most exciting moments.

Of course, as was the case in the first episode, Rachel Amber is the key character in this second episode of Life is Strange: Before the Storm, and you’ll get plenty of chances to know her better while playing as Chloe in this episode. One such occasion is during a play at Blackwell Academy, which surely is one of this episode’s highlights, as it’s humorous and entertaining while also serving to advance Chloe’s and Rachel’s relationship in the game.

The story here is conveyed in other ways too, via text messages sent to Chloe by other characters, and also via Chloe’s notebook, which is fun and fascinating to read and sheds light on events that have taken place so far in the episode and the series as a whole. 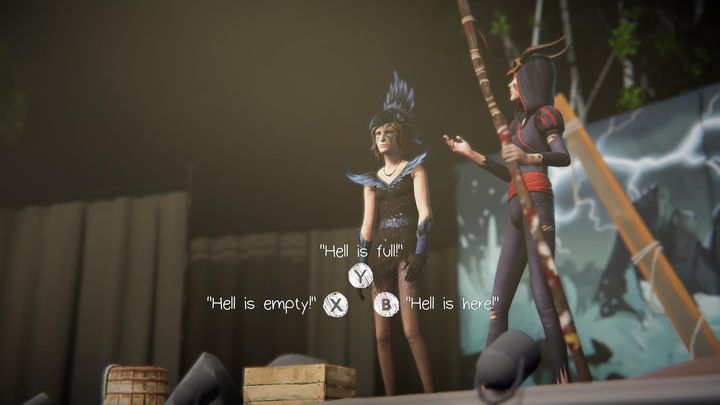 A theatre play at Blackwell Academy is one of this episode’s highlights.

Aside from the fact that the game’s texts are fun to read, it’s also a good thing that the voice acting is pretty good in general too. And the voice actress behind protagonist Chloe is solid enough that I didn’t miss Ashly Burch’s dulcet tones here (Burch voiced Chloe in Life is Strange’s first season, but did not return for this prequel due to a Screen Actors Guild strike last June).

The music here too is a step up from that heard in this second episode of this Life is Strange prequel, with good licensed songs, while I still think the main theme is a haunting and enjoyable piece of music.

All in all, Life is Strange: Before the Storm – Episode 2: Brave New World is a cut above last summer’s first episode, then. And I am definitely looking forward to seeing how developer Deck Nine wraps things up in the third and final episode of this Life is Strange prequel later this year. Hopefully things will end on a high note, but if that’s not the case, we always have the upcoming Life is Strange 2 to look forward to.

Life is Strange: Before the Storm - Episode 2: Brave New World

→
Next: StarCraft 2 goes free to play later this month