Although Life is Strange caused a sensation in 2015 and earned developer Dontnod Entertainment millions of fans worldwide, Life is Strange: Before the Storm has managed to live up to Dontnod’s original episodic adventure, with episodes 1 and 2 being pretty good from start to finish.

And now that Developer Deck Nine (who took over from Dontnod for this Life is Strange prequel) have released the final episode of the series, does this wrap things up in style? Read on to find out.

This third episode of Life is Strange: Before the Storm (titled “Hell is Empty”) begins during the aftermath of the previous episode’s big reveal, in which protagonist Chloe’s best friend Rachel Amber learned a shocking truth about her mother. We soon discover in a cool flashback to Rachel’s father’s past that her biological mother followed a crooked path, while later on in this episode it is revealed her father is not the morally upright man she thought either…

And if you’re thinking this episode is a tear-jerker – then you’re right, it is… Because not only is this first flashback scene emotionally moving, this episode is also full of genuinely heart-warming moments, making it worth playing through to the end.

This is despite the fact that familiar characters from 2015’s Life is Strange like Victoria Chase, rich kid Nathan Prescott and Blackwell Academy head Principal Wells hardly make an appearance here, while the main antagonist from season one (a small-time drug dealer named Frank) doesn’t cause much of an impression either. Thankfully, he’s replaced by a more menacing bad guy who’s at the centre of some of this episode’s best moments.

Protagonist Chloe’s mother Joyce and her new fiancée David do feature in some scenes, though, and as is to be expected, Chloe is still resentful with the man for having taken over her father’s role.

Like in the earlier episodes, though, the scenes in which you get to interact with David are not up to much, and there’s also one cringeworthy scene involving the guy’s military past too… Of course, you have a choice to be friendly to David or shove him away in one of this episode’s big decisions, even if this doesn’t amount to much in either case.

This is because most dialogue choices have no direct consequence on how things play out in the story. Actually, except for a big choice at the end (which leads to one of two different endings), very little of what you say or do seems to alter the flow of things here. 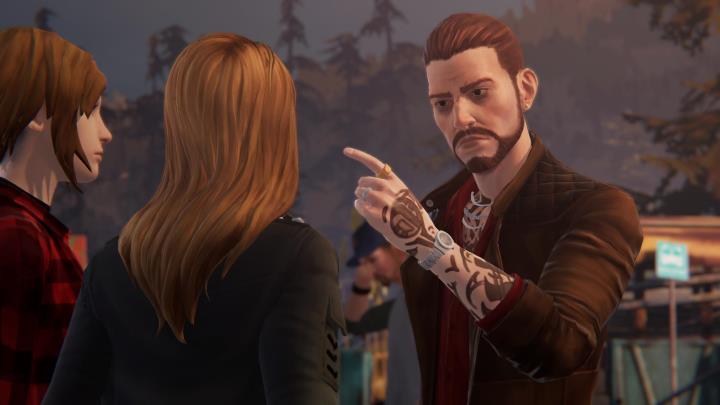 Chloe and Rachel make new enemies in this final episode of Life is Strange: Before the Storm.

This is also true of the game’s so called “backtalk challenges”. Like in the previous two episodes of Life is Strange: Before the Storm, sometimes a blue icon appears next to a conversation choice, letting you take part in a backtalk challenge. Here you have a limited amount of time to pick the right response to what the other character said (the correct choice is related in some way to what the other person said, and is not that hard to figure out).

However, the satisfaction of winning the backtalk challenge is diminished by the fact that this only leads to a slightly different outcome.

For instance, at some point in this episode Chloe is impeded by an overzealous classmate from leaving an office where she is searching for clues regarding Rachel’s mother. Thankfully, you can engage in a backtalk challenge with the guy in order to persuade him to let you leave… But winning this challenge just leads to a cleaner escape (no alarms triggered), and nothing else.

Because the truth is that at times Life is Strange: Before the Storm mostly offers an illusion of control more than the real thing, with the story appearing to be on autopilot most of the time.

Another case in point is that sometimes you get an extra dialogue choice (which appears underlined during the conversation), as a result of you having discovered additional information during your exploration of the game’s different locations. This is the “right” choice which will lead to the most favourable outcome for protagonist Chloe, even if in most cases this outcome is only slightly different to the one you would have got if you have picked a different response.

At least this gives you an excuse to explore the game’s locations, which truth be told look pretty great, featuring more detailed objects and backgrounds than 2015’s Life is Strange. So do the character models, with Chloe and other characters looking quite a bit better than in the original Life is Strange game.

The game mostly reuses locations from the first Life is Strange, though, such as Chloe’s parents’ home and the Arcadia Bay junkyard, a location which should be pretty familiar to Life is Strange fans by now (actually, even the site of the rock concert from episode one is reused here). But at least there are a few new locations to explore, such as a hospital, and also Rachel’s dad office.

One of the best bits of the game takes place in the office, where you have to piece together clues in order to solve a mystery like in the final episode of 2015’s Life is Strange. This is not particularly hard as the game’s puzzles are pretty basic in general, amounting to little more than picking up one object to use with another, and shouldn’t give you too much trouble. 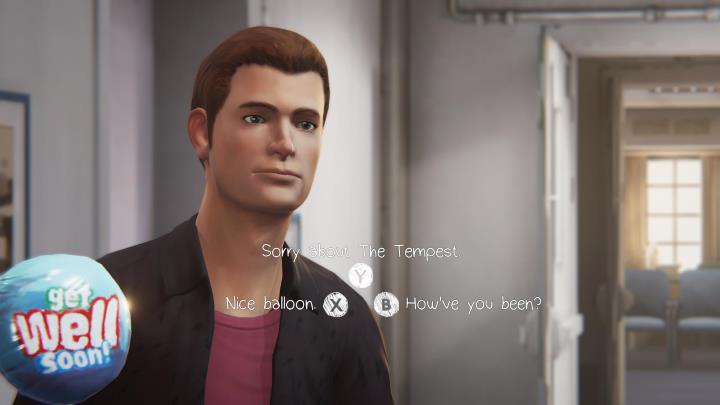 Like in the earlier episodes, there’s plenty of funny and interesting dialogue to enjoy in this episode.

Investigating Rachel dad’s office, you also have to figure out which character to accuse based on the evidence and documents you read in the office, and it’s fun. You do this to persuade the episode’s main villain to reveal a key bit of information (the man suspects one of his collaborators is an informant, with evidence of this being in the DA’s office – who happens to be Rachel’s father).

Also, reading texts and searching for clues in this episode’s office scene reminded me that while Life is Strange’s dialogue is fun to listen to, it’s also great that a lot of character and world-building in this prequel is done in other ways.

For instance, it’s fun to hear Chloe’s thoughts when inspecting objects (“I could get grades like this… If I wanted”, says the teenager of her best friend Rachel’s report card). Also, when looking at a photo of Rachel and school bully Nathan Prescott, she wonders if the two could really be in a relationship, given Rachel’s good-natured personality.

All this is expanded on in Chloe’s diary, which still offers interesting insights into the rebellious teenager’s mind, and is as entertaining to read as in earlier episodes. It’s also fun to check up on your in-game friends SMS messages, this being another great way in which Deck Nine fleshes out the game’s world and characters outside of dialogue.

There is also a weird and wacky dream sequence involving Chloe’s father that takes place in a theatre (the scene of episode 2’s play). This slightly surreal scene is one of this episode’s highlights, no doubt. It’s also clear Chloe’s memories of her father’s death still haunt her in this episode, and this troubled part of Chloe’s life is something that developer Deck Nine has handled pretty well in this Life is Strange prequel.

It’s also great that the role-playing board game that you had a chance to play with Chloe’s Blackwell Academy friends in episode one continues here. This involves a pretty long sequence in which you get to know some of Chloe’s mates better, and it’s pretty absorbing and entertaining even if it’s just a rehash of what was seen in episode one.

You may also not like the fact this episode wastes quite a bit of time with mundane activities such as showering and changing clothes in the early goings, but these bits are still fun to play through nonetheless.

You also get to make some clothing choices for Chloe at some point, such as picking the shirt she is to wear for the remainder of the adventure, which is a nice touch. Plus, Chloe’s taste for that blue hair dye begins here, putting her on the path to becoming the character Life is Strange fans got to know and love in 2015’s game. 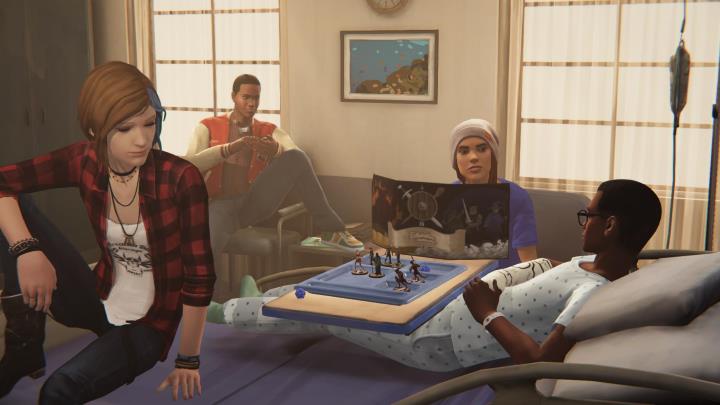 Taking part in a board game with Chloe (left) and her friends is as much fun as it was in episode one.

Also, those who’ve already played the first season of Life is Strange know what happens to Chloe’s best friend Rachel in the end, and there’s a small, post-credits scene that ties to that. It’s a nice bit of fan service, but I was hoping for a more direct connection to the events of 2015’s Life is Strange, as this is mostly a self-contained story overall.

But at least those wanting to know more about these characters can look forward to the bonus episode coming in early 2018. This will once again feature actress Ashly Burch in the role of Chloe due to fan demand (Burch was unavailable to voice the character for this prequel).

Truth be told, though, I have already warmed up to the new voice actress playing Chloe in this Life is Strange prequel, and did not miss Burch in this episode. And overall the voice acting in Life is Strange: Before the Storm is pretty solid, even if there’s some monotonic and annoying dialogue delivered by characters like Rachel Amber’s father and Chloe’s mom Joyce.

Nonetheless, it’s clear this is a great episode and good conclusion to this Life is Strange prequel, and one which captures the essence of the series: a coming of age story and family drama set against a backdrop of mystery, with plenty of moments of reflection that shed light on the world and its characters, and more violent, action-packed scenes thrown in for good measure too.

I can only hope that developer Dontnod is able to deliver the same winning mix with the upcoming Life is Strange 2, but for the time being this third episode of Life is Strange: Before the Storm is surely one that fans of the series will enjoy.

Life is Strange: Before the Storm - Episode 3: Hell is Empty

→
Next: PUBG Corp CEO discusses PS4 version, fog, cheaters and his future plans for the game in interview