When Sega launched the Mega Drive and Genesis Hub on the Steam platform on April 28, nobody was expecting that hundreds of thousands of old Mega Drive games would have been sold by now, and not Sega itself, which was clearly surprised by the strong sales figures.

Sega Europe’s director of digital distribution James Schall said “350,000 sales is a phenomenal achievement for content which is over 20 years old!”, adding that “it shows that there’s still a huge following out for the Sega Mega Drive and Genesis, reinvigorated by the fantastic community of modders out there uploading great content.”

The Mega Drive and Genesis Hub (see video above) is accessible through the Steam application, which is also used to access the Steam store, which sells thousands of video games online, mostly on PC. Sega’s hub has a graphical user interface that looks like a 90’s era bedroom (complete with one of those old cathode ray tube TVs) and allows users to play any Mega Drive or Genesis games they’ve bought on Steam.

The old Mega Drive console (known as the Sega Genesis in North America) was released in the late 80’s and became a hit, featuring great video games like Golden Axe and Street of Rage. Both these games are now available on the Steam store, allowing those gamers who got to enjoy them on Sega’s old console to relive old memories. 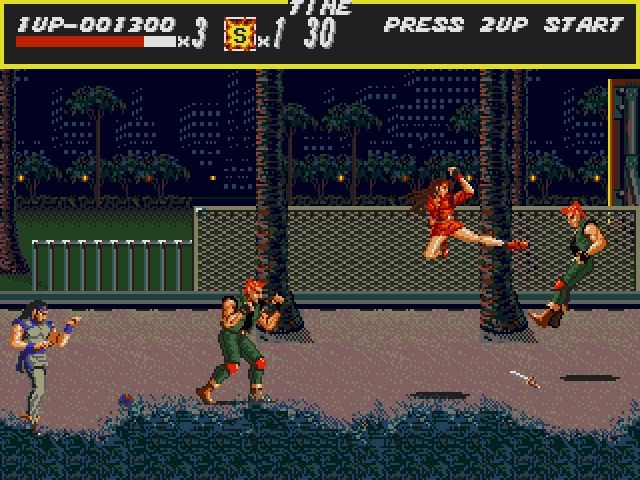 Streets of Rage is an old Sega classic now available on Steam.

Golden Axe was a great medieval fantasy side scrolling fighting game, and although not the longest game made to date, had superb gameplay and was great to play cooperatively with friends. And Streets of Rage was also a fighting game set in modern times with a great cast of characters: the speedy and agile female fighter Blaze, the tough as nails Adam and the brawler Axel. Apart from Golden Axe and Streets of Rage, many other Mega Drive games are available on Steam, like the classic platformer Sonic the Hedgehog and Altered Beast.

And it is certainly remarkable that there is still so much player interest in games that are over 20 years old (the Mega Drive was discontinued in 1997), although part of the appeal of replaying these golden oldies is that these games now feature modding support thanks to Steam Workshop support.

This allows people to release mods for these games which can change certain aspects of the video game. For instance, there’s a user mod for Streets of Rage 2 that replaces the death cry sounds with something you might not expect…

And given the interest in retro gaming and the classic video games from the 90’s, perhaps it would not be a far-fetched for a video game company like Sega to consider releasing remastered editions of games like Golden Axe, Streets of Rage or Sonic the Hedgehog. And given the success of the Sega Hub on Steam, this is something that might yet become a reality…

→
Next: Will Star Wars Battlefront 2 feature a single player campaign?