Assassin’s Creed Odyssey was one of the biggest video games of 2018, and became a hit for Ubisoft despite being disliked by some Creed fans due to its story, new RPG elements and for being overlong and featuring too much grind.

Odyssey is one of the top-selling games in the franchise to date, though, so it makes sense that Ubisoft will be putting out another game in its long-running video game series next year, when new consoles from Microsoft and Sony will be hitting the shelves.

That game is rumoured to be Assassin’s Creed Ragnarok, which was previously known internally at Ubisoft by the codename Kingdom according to leaked information which surfaced earlier this year.

And now even more information about Ubisoft’s upcoming game (which hasn’t been announced yet) has apparently been leaked on Reddit (via Push Square).

Also, this leak confirms the Viking setting, something that Ubisoft itself had hinted at in an image in The Division 2. This latest leak, though, narrows down the time period: Assassin’s Creed Ragnarok will be set during 800 AD, and its map will encompass Scandinavia and a sizeable chunk of England, something which was also claimed in an earlier leak. If this is the case, then the next Assassin’s Creed will have the biggest map seen in the series to date.

The city of London will be featured in this latest Assassin’s Creed according to the leaker.

Most interesting is the fact that this new Assassin’s Creed will seemingly bring back the recruitment system seen in 2011’s Assassin’s Creed Brotherhood which so many people enjoyed, and which let you build your own Assassin army in the game. 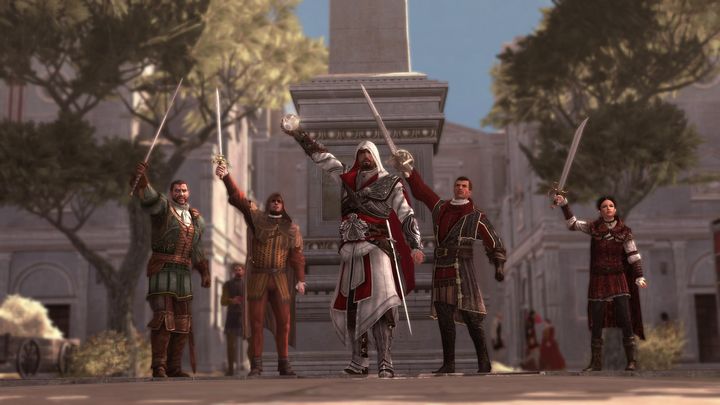 So this is definitely a plus, and also the fact that, as we already knew from a previous leak, naval combat will be scaled down from that of earlier games, meaning the action will be taking place more on land than at sea, something which I personally prefer.

Regarding the present-day story, there will be even less of this in Assassin’s Creed Ragnarok than in Assassin’s Creed Origins or last year’s Odyssey, which may be a pity for some. Apparently Ragnarok also concludes the modern-day storyline involving Abstergo employee Layla Hassan which began in Origins, or maybe puts an end to the entire present-day stuff – this is not clarified by the leaker.

Also, the next Assassin’s Creed will build on the gameplay seen in Odyssey, expanding the RPG elements and improving the gameplay mechanics according to this leak, something you may not like if you’re not fond of the series’ new role-playing elements. Presumably this will also feature the dialogue choices which were introduced in the 2018 game.

Whatever the case, Ubisoft needs the next Assassin’s Creed game to do well. After the failure of several of its big AAA titles this year, and the delay of major games like Watch Dogs Legion, the French publisher will really want its next batch of games to score big, while fans will also be looking forward to another exciting Assassin’s Creed adventure.

And we won’t have to wait that long to see the next Assassin’s Cree in action, as it apparently will be revealed during the big PlayStation event in February 2020, at which Sony will finally show its eagerly anticipated PlayStation 5 console to the public. Here’s hoping, then, that the next Assassin’s Creed turns out to be one of the series’ best when it hits shelves at a future date.

Update: A newer leak has confirmed most of these details including the 9th century Viking setting, and added more tidbits of information such as the next Assassin’s Creed game starting with a big battle on an island (as was the case with Assassin’s Creed Odyssey).

Also, Ragnarok will build on the combat system of the previous game (shields will be returning to the series). Superpowers will still be in the game, and players will be making use of heavy weapons such as axes to cut down their foes according to the most recent leak. This will draw from Norse mythology, and gods like Odin will feature prominently.

All this sounds very promising, so stay tuned to this website for more information regarding the next Assassin’s Creed as it becomes available.

→
Next: Alien: Isolation will be hitting the Nintendo Switch next month
Share this >
YOU MAY ALSO LIKE
MORE ON LAKEBIT