Back in 2016, game developer Bethesda disappointed many people when they revealed that they would not be remastering Oblivion.

The Elder Scrolls IV: Oblivion (to give it its full name) is, as many people know, one of the best role-playing games to see a release in the 2000s. Its successor Skyrim, however, is the game most people think about when the Elder Scrolls series is mentioned, even if Oblivion still holds a place in many gamers’ hearts.

Bethesda, though, said remastering their 2006 game would involve too much work, and instead released a remaster of their much-loved RPG Skyrim instead.

Fortunately, an intrepid group of volunteers has been beavering away on remastering Oblivion for years now, calling their project “Skyblivion”. The reason for this moniker is that the team is using Bethesda’s Skyrim engine to remake Oblivion, with Skyblivion basically being one giant user mod for Skyrim.

And its been a huge undertaking as is explained in Skyblivion’s latest developer video, which showcases the work that has gone into Skyblivion, even if no release date has been revealed yet.

For instance, different goblin tribes feature in the game, each based in a different region of Cyrodiil (a province in Tamriel, the fantasy world where the Elder Scrolls games take place). The video shows goblin raiders attacking human settlements, and even some form of social hierarchy, there being goblin cooks, warlords and leaders (the shaman), showing the people behind Skyblivion have put quite a bit of effort into reimagining Oblivion’s pesky goblins.

So is the case when it comes to clothing, with Skyblivion’s team of 3D artists having been hard at work recreating the clothes of Oblivion’s huge cast of characters with plenty of attention to detail.

So is also the case with weapons, there being quite a few unique ones in the game such as the sword of Umbra seen in the video around the 8:05 mark. This is one of the most powerful weapons in the game (and belongs to one of the most powerful enemies you will encounter too as you can imagine). It’ll definitely be fun to wield this sword in combat as well as other unique weapons such as the warhammer Volendrung, also featured in Skyblivion.

These and other items such as an enchanted helmet seen in the video tie to the “Daedric” quests in the game, some of the most fun in Oblivion (which will obviously be included in the Skyblivion remaster), which truth be told taking into account what is seen in this developer update is more of a remake.

Also, in-game architecture is as detailed as everything else, and the video takes a good look at the city of Bruma. A statue of the god Talos in the city center and its cathedral look really good, once again showing all the love and attention the people behind Skyblivion have been pouring into the game. 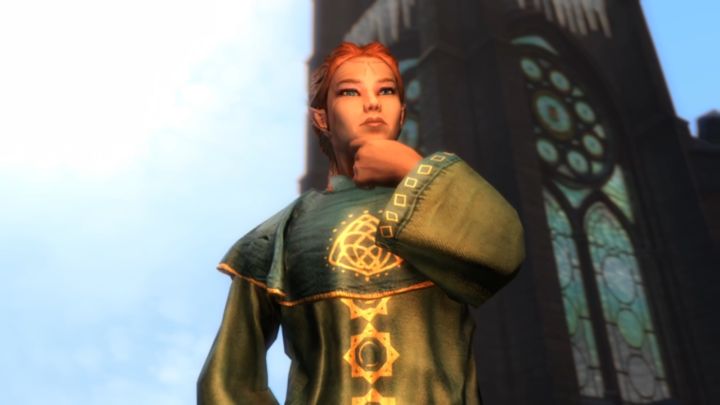 The city of Bruma and its characters will feature in Skyblivion.

The thing is that, like other big modding projects (such as the famous Half-Like remake Black Mesa), this has been a long time in the making, and while it is said in the video that the team is “finally seeing the end of the road”, Skyblivion could still be a year or more away from release.

It remains to be seen whether interest remains high when Skyblivion is finally released, or whether gamers will be too busy playing Bethesda’s upcoming sci-fi RPG Starfield (or something else) to care.

There’s also the fact that the next Elder Scrolls game could be hitting shelves by 2025, so the Skyblivion team might want to put out their remake much sooner than that. Skyblivion is based on the Skyrim engine, which is looking more and more dated in terms of visuals and gameplay with each passing day.

Nonetheless, Skyblivion should still generate interest whenever it releases (it being a remaster of one of the best-known RPGs of all time) so here’s hoping this fan-made project sees the light of day sooner rather than later.

→
Next: This is why Bethesda chose to release Starfield before The Elder Scrolls 6