Shooting birds out of the sky, and using a chair as a weapon in Skyrim
↑
SHARE
TWEET

The Elder Scrolls V: Skyrim landed back in 2011, but plenty of people are still playing Bethesda’s fantastic role-playing game, which has enough content to keep the average player busy for hundreds of hours as they explore the frigid northern province of Skyrim, home of the Nords.

But despite the fact that Skyrim will turn nine (yes, nine!) years old when November 11 hits this year, it seems people are discovering new things in the game still.

For instance, it is possible to shoot birds out of the sky, something I had never even attempted to do in the more than two hundred hours I have spent playing Bethesda’s classic to date. And yet the video below (via Eurogamer) shows and avid Skyrim player dispatching hawks near the game’s city of Solitude with aplomb. And even if you could argue the lad has way too much time in his hands, his skill with the bow and arrow sure is worthy of admiration.

There’s also a reward to be had as I myself found out when you manage to make a hawk bite the dust: its dead body can be looted like that of any other creature in Skyrim, so its beak and feathers are yours for the taking, to be used in alchemy or be sold in any of Skyrim’s stores according to your preference.

There are other ways to knock out birds out of the sky too: using your Dragonborn powers, in particular the Dragon Shout known as “Kyne’s Peace” will make any birds flying overhead die and fall to the ground immediately.

So a shout most people likely found useless is quite powerful in its own way, and actually does more than just calm wild animals down as its in-game description says.

Of course, aside from discovering new things to do in the game, you can also resort to the thousands of user modifications (mods for short) which have come out for the PC version of the game to spice up your adventures in Skyrim, something which dedicated players have been doing for years now.

There are mods which beautify the game in many ways, and a few mods which are flat out crazy. Meanwhile, others change parts of the game such as Skyrim’s introduction, adding bits which were cut by Bethesda. Total conversion mods such as Enderal offer a completely new gameplay experience too.

There’s also a mod which lets you manhandle your enemies, giving you formidable strength, while a recently released mod titled “The Chair” lets you turn that ordinary piece of home furniture into a deadly weapon, as you can see in the image below. 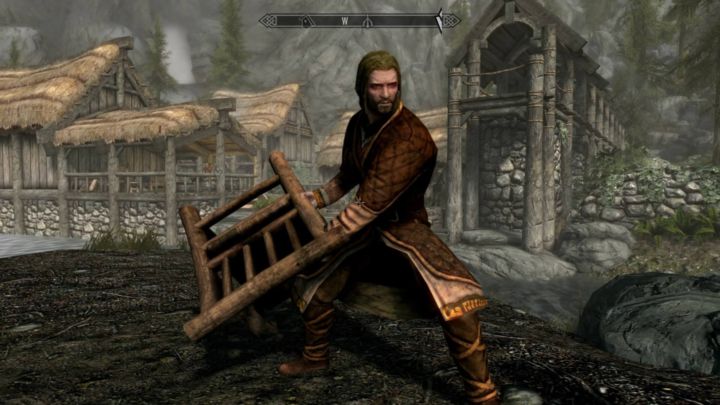 ADVERTISEMENT
This mod, which you can grab for PC by heading over to the nexusmods.com website (via PC Gamer), should finally settle the question of “What’s the best weapon to use against a dragon?”, especially if you pick the OP version of the mod which grants a chair that does a whopping 737 damage per hit.

You can make a chair to use as a weapon in the game by visiting a forge, and using three leather strips to make one as the mod’s description page explains.

The Chair only seems to be available for PC right now though – if you’re gaming on console, there are plenty of mods available to sink your teeth into nonetheless.

And this definitely shows what a long-lived and still fun game Skyrim is, something which should make waiting for its upcoming sequel more bearable. The big question is, though, when will the next instalment of Bethesda’s RPG series arrive?

There have been rumors in the past that pointed to The Elder Scrolls VI arriving sooner than expected, although Bethesda itself has said more than once that a sequel to Skyrim is still a long ways off. Here’s hoping, then, that Bethesda can pull it off with The Elder Scrolls VI and that it turns out to be as great a game as Skyrim when it hits shelves sometime in the future.