Like the previous Resident Evil movies, the latest flick in the long-running movie saga has turned out to be a worldwide hit, making more than $300 million worldwide according to boxofficemojo.com. This not only makes it the top-grossing Resident Evil movie of all time, but also one of the most successful movies based on a video game property to ever come out of Hollywood.

So this means that Resident Evil fans once again got their fix of zombie-blasting action and scares that director Paul W.S. Anderson is famous for, while those who enjoyed the movie will also be happy to know that the film is coming to Blu-ray on May 16 this year too.

And this Blu-ray disc includes a few interesting bonus materials that fans of the iconic movie series will appreciate as well, as revealed in a press release by Sony Pictures.

For starters, there’s a featurette named “Explore the Hive”, which as the title suggests, focuses on the Hive. This is the secret underground research laboratory where the evil Umbrella Corporation was carrying out covert bioweapons research, and where the zombie outbreak began in the first Resident Evil movie back in 2002.

Actually, this year’s Resident Evil: The Final Chapter was the first movie since the original to take place in the Hive, and it will no doubt be interesting to get additional details about the creepy zombie-infested lab seen once again in The Final Chapter.

The Blu-ray also includes another featurette titled “The Badass Trinity & The Women of Resident Evil”, which looks at the female heroes of the film. And it’s clear that the Resident Evil movies are remarkable for featuring a strong female lead like Alice, as most video games and movies based on them have featured male leads in the past.

But Milla Jovovich’s character is not only an ass-kicking lady who can rival the likes of Lara Croft, but is also supported by other strong female characters like Claire Redfield, and it will sure be interesting to see what additional details we can learn about these intrepid female leads here.

This Blu-ray release also boasts a so-called “Retaliation Mode”, in which the movie’s director and lead star Milla Jovovich break down and comment on the movie’s key scenes. This adds 30 minutes to the running length of the movie, and hopefully these bits will be interesting and insightful for fans of the movie series too, while there’s also another featurette titled “Stunts & Weaponry” which looks at these two aspects of the film. 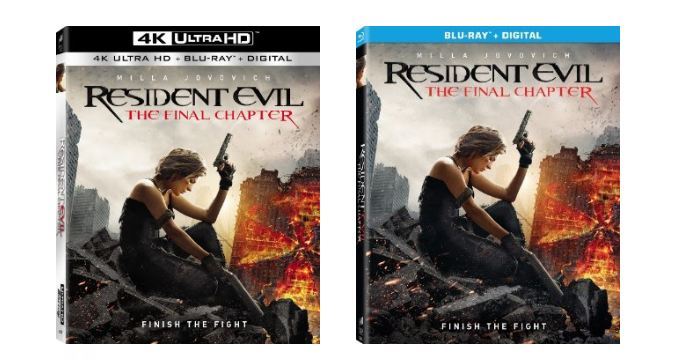 ADVERTISEMENT
But perhaps the most noteworthy extra on Resident Evil: The Final Chapter’s Blu-ray is a video which gives viewers a sneak peek at the upcoming Resident Evil: Vendetta, an animated movie set in the Resident Evil universe which is slated for release this summer.

So fans of the Resident Evil movies will no doubt appreciate the fact that this Blu-ray is packed with extras, although it remains to be seen whether these will be as worthy and entertaining as the film itself when the movie hits retail in May this year.

Note: Resident Evil: The Final Chapter will be released on Blu-ray and DVD on May 16, 2017 (it will be available on digital on May 2).

IMAGE CREDITS
Resident Evil: The Final Chapter (Screen Gems)
→
Next: Another Assassin’s Creed game is now playable on the Xbox One