Back in early 2015, The Order: 1886 by developer Ready at Dawn was one of the most eagerly awaited PS4 exclusives, with the game promising to be one of the best-looking games to date, featuring a great, atmospheric Victorian London setting and superb single player action.

In the end though, most video game outlets found the game to be something of a mixed bag, and most websites were critical in their reviews, with the likes of GameSpot stating that the game “overlooks the best aspects of its premise in favor of boring storytelling”. Other publications like Eurogamer said that The Order: 1886 “is an incredibly handsome game”, but that it is “a hollow diversion”, while the game’s Metacritic score stands at 63, which is average indeed…

The key question here is though, was this an underrated game? Were The Order’s mediocre review scores justified, or was it all part of some kind of backlash against publisher Sony in the mainstream press, as some websites had suggested at the time?

The answer is that, while no doubt The Order: 1886 indeed looks phenomenal, its gameplay shortcomings and short length did warrant its average scores. Although I must admit that when it comes to looks though, this game is perhaps the best-looking on PS4 to date, with photo-realistic textures, incredible lighting and beautifully animated and detailed character models. Developer Ready at Dawn created one of the best-looking video game worlds ever seen, and certainly deserve to be commended for that. 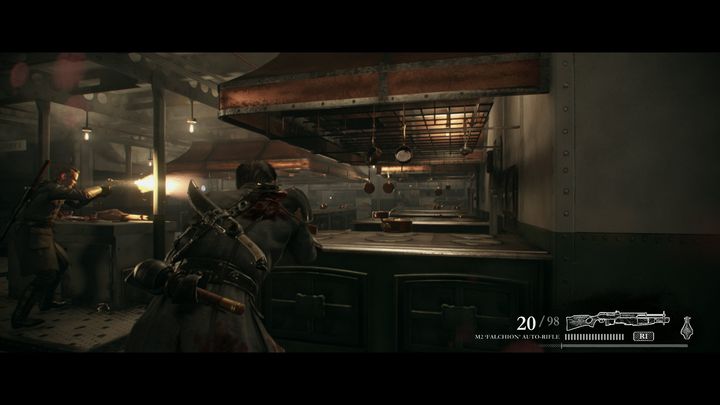 The Order: 1886’s firefights were action-packed and exciting, even if the QTE sections did let the game down…

But there’s no escaping the fact that most players will be done with the campaign in no more than 8 hours, and will have little incentive to replay the game once they are done (there’s no multiplayer component of any sort either). The campaign’s quality is also uneven, as aside from the third-person shooting sections it also features plenty of sequences with those dreaded QTEs (Quick Time Events) in which you have to hit buttons at precisely the right time and in a certain order to make it through.

An example of this are the stealth sequences in which you approach guards from behind and have to hit the PS4’s triangle button at exactly the right time to finish them off, or it’s back to the beginning…

The Gears of War-style shooting sections are better though, and one of the game’s highlights. Aside from the standard machine guns, shotguns and rifles, you also get to use an arc gun that fires electricity and a thermite gun that can set the battlefield ablaze, and it’s great to see the game’s destructible environments react to the mayhem when a gunfight is going on. Also, enemies force players to remain on their toes by tossing grenades when they are under cover and heavily-armoured foes equipped with shotguns tend to charge at players, forcing you to move around the battlefield, making combat more exciting.

So despite its shortcomings, The Order: 1886 is still a game that has a lot to offer, and while it may have not been an essential purchase at its $60 launch price back in 2015, it is still a good PS4 exclusive that’s worth checking out now.

→
Next: Is there a dark side to Pokémon Go?