4. Tim Curry (Frankenstein: Through the Eyes of the Monster) 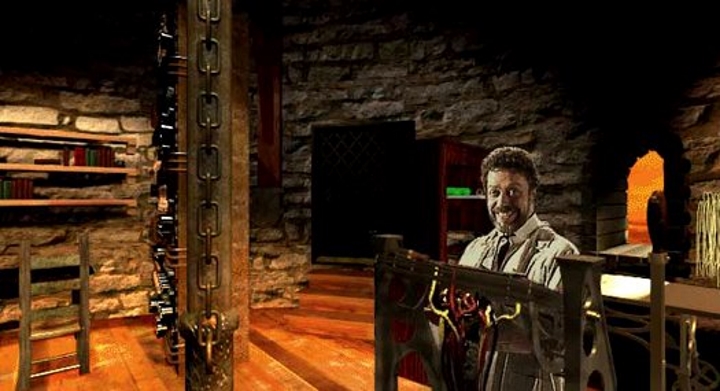 Dr. Frankenstein could create life… But not even he could make this video game less dull.

Back in the early 90’s, a video game named Myst was released. It turned out to be a huge hit, as a matter of fact it was the best-selling PC game until Will Wright’s The Sims came out in 2000. It was little more than a slide show however, as the player had to wonder a deserted island, looking for clues to unravel some kind of mystical mystery nonsense and solving the occasional puzzle.

And what does this have to do with Tim Curry? Well he acted in Frankenstein: Through the Eyes of the Monster, which was essentially a Myst clone, but without the pretty graphics and an even more nonsensical story. Tim Curry played Dr. Frankenstein and showed his love for the dead by reviving a scientist named Phillip (the player character), falsely accused of murdering his daughter. This game’s environments (Frankenstein castle) were repetitive and the puzzles dull. And while the rest of the cast leaves a bit to be desired, Tim Curry’s acting helped spice up an average game.