There was a time when video game developers were obsessed with including live action scenes in video games, and “interactive movies” were all the rage. Back in the 90’s, video games like Chris Roberts’ Wing Commander III featured live action sequences made with multi-million dollar budgets, starring world-renowned actors like Mark Hamill and Malcolm McDowell.

And not only epic space operas like Wing Commander had live action bits which would pause every now and then, allowing the player to pick a conversation response which could potentially alter the course of the story, but also best-selling games like the Myst series were built around full motion sequences with real actors.

But it is clear that the “interactive movie” is now largely a thing of the past, and games now feature 3D models of real actors (instead of flesh and blood ones making a dubious impression) in their cutscenes. And even though games like the upcoming Quantum Break will feature live action sequences that play out differently depending on player’s actions in the interactive action sequences of the game, it is clear that live action scenes in video games are a rarity these days.

So it might be shocking for some that the upcoming movie Hardcore Henry, which will hit theatres this April, is shot in a first-person perspective, looking like the live action bits of an interactive movie game from the 90’s.

Actually, director Ilya Naishuller is something of a video game fan, even stating in an interview with grantland.com that “I love Half-Life, but there’s not a nod to Half-Life, apart from the fact that it is a first-person movie, which to me is a nod enough”. And there’s no doubt that the movie’s trailer above is over the top and features action sequences which might remind viewers of Valve’s classic action game Half-Life, and the video game feel is no doubt there. 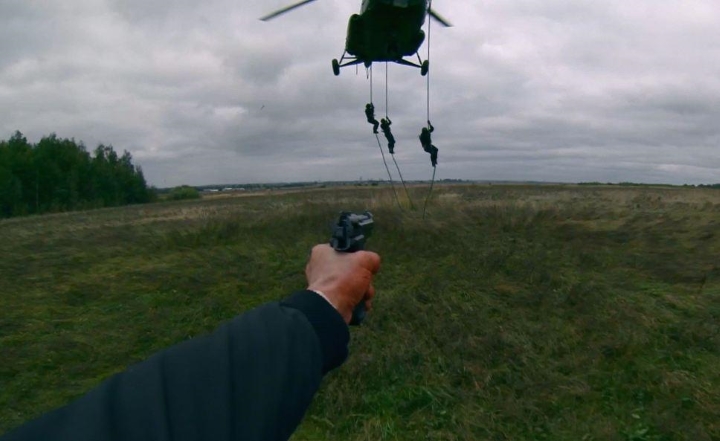 According to the movie’s description, Hardcore Henry begins with protagonist Henry lying in a bed while being nursed by his wife, who afterwards is kidnapped by a mercenary group, being up to the daring husband to bring her back to safety… The movie’s cast includes actor Tim Roth, whom you may have seen acting alongside John Travolta in Quentin Tarantino’s Pulp Fiction, and Haley Bennet, who caused a good impression in the 2008 film Marley & Me.

Although it remains to be seen how the public and those pesky critics react to the movie, Hardcore Henry is at least a bold experiment, as few mainstream movies are shot from a POV (Point of View) perspective, putting viewers in the protagonist shoes.

And now that more people are playing video games than ever, and that gaming is seen as an acceptable pastime, it is likely that many viewers will take to Naishuller’s movie. And if this POV movie inspired by video games is a success, it can only be a good thing for the video game industry, proving that video game-style storytelling can succeed in the silver screen too.

→
Next: Why Ubisoft Is Not Releasing an Assassin’s Creed Game in 2016