Assassin’s Creed Origins surely delighted many fans of the franchise last year, thanks to its great gameplay, good story and interesting new protagonist. And earlier this year, Ubisoft put out a first expansion for the game, which is now followed by a second major expansion – titled The Curse of the Pharaohs – which wraps up protagonist Bayek’s adventures in ancient Egypt.

Unlike the first expansion, though, this Curse of the Pharaohs DLC offers a self-contained story, and is not a continuation of the events which began in the main game. And unlike earlier expansions for Assassin’s Creed games, this takes a turn for the supernatural, while also going above and beyond what was offered in the main game, and is surely one of the best expansions released for a video game in the last couple of years.

Leaving behind the struggle between the Hidden Ones (the first Assassins) and the Order of the Ancients (an early version of the Templar order) Curse of the Pharaohs sees Bayek travel to the Egyptian region of Thebes, in which strange events are going on.

You see, pharaohs have arisen from amongst the dead, and are now wreaking havoc in ancient Egypt. And after paying a visit to an attractive priestess, Bayek discovers the source of this calamity: the citizens of Thebes have been stealing relics from the their tombs, something which has apparently made the pharaohs mad…

Early on, you get to witness the citizens of Thebes fighting a Pharaoh’s Shadow, which are physical manifestations of the pharaohs in the real world. These are imposing, high-level enemies with powerful weapons which take quite a bit of effort to defeat, and it sure is a spectacular sight to see a group of soldiers taking these head on.

Of course, you can also engage these enemies in combat, and as a matter of fact the game will remind you every now and then that “A Pharaoh’s Shadow has arisen”, marking its location on your map, and letting you help the beleaguered people of Thebes take these down.

This is not something I devoted much time to during my playthrough though, but it does add a sense of urgency to the proceedings, and also makes the plot’s premise of a region in Egypt which is being besieged by supernatural forces all the more convincing in my view.

Defeating these Shadows makes them return to the afterlife, while also netting you a sizeable amount of experience points in some cases, which helps you level up and face tougher enemies later on. 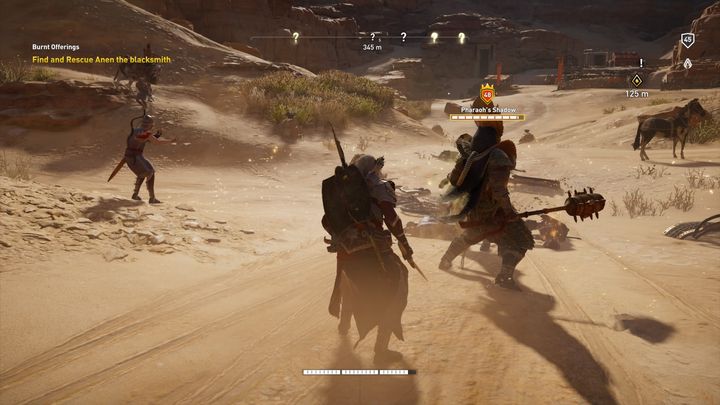 Pharaohs’ Shadows roam the land, and it’s up to you to take them out.

Like in the main game, quests have a suggested level, and early quests require that you are at least level 44. The later quests require you have reached a level above 50, so you really need to have cleared most of the main game’s quests as well as the previous DLC (The Hidden Ones) before diving into this Curse of the Pharaohs expansion, if only so that you have a better chance of being able to ace the challenges you’ll face in this DLC.

And there sure are a wealth of quests to tackle here, taking place across this expansion’s new region of Thebes. These include one in which you have to free a priest from a bandit camp, one in which you’ll be taking out a corrupt official who’s bleeding the local farmers dry, while another requires you to help a priest complete a ritual, amongst others.

Also, it’s worth pointing out that this DLC features plenty of the Witcher 3-style investigation sequences, which were also seen in the main game. In these, you have to look for clues in an investigation area in order to find out what happened at the scene of a crime, for instance. These bits are as fun as they were in the main game, so it’s a good thing protagonist Bayek gets to play ancient Egyptian detective quite a bit here.

Also, the prevalence of investigation sequences makes this expansion not feel as combat-heavy as the previous Hidden Ones DLC, but this doesn’t mean there are no powerful enemies for you to defeat here. These include the undead pharaohs themselves, plus other enemies you’ll find in the pharaohs’ afterlife, which you’ll have to enter at some point in order to lift the curse that’s plaguing Thebes.

You get to the pharaohs’ afterlife via portals inside their tombs. Anyone a bit familiar with Egyptian history knows these are located in the Valley of Kings (and also in the pyramids of course, but since this expansion is set in Thebes, there are none to be found here). One such Pharaoh is Nefertiti, who’s afterlife could be called dreamy, to say the least.

In Nefertiti’s afterlife, you’ll find fields of wheat that stretch until the horizon, boats that navigate the fields (and not seas or rivers as you would expect), while fantasy creatures with the body of an owl and a human head abound too… In the middle of all this, there’s Nefertiti’s temple, while as expected there are statues of the Egyptian pharaoh everywhere here too, making this some of the prettiest-looking scenery seen in the Assassin’s Creed series to date no doubt. 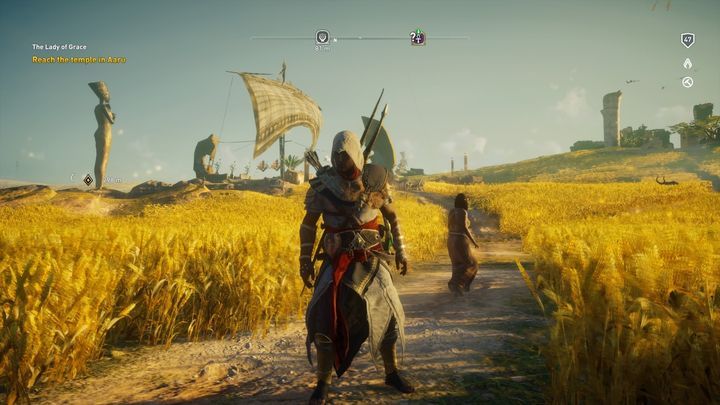 This is how the afterlife of a pharaoh looks.

But no matter how pretty Nefertiti’s afterlife looks in this Curse of the Pharaohs DLC, you do not enter the underworld to do some sightseeing though, but to take on the angry pharaoh herself after returning a relic stolen from her tomb in an earlier quest.

After returning the relic to Nefertiti’s throne I watched her undead figure take shape before my eyes in a pretty stunning cutscene, but I soon discovered I wasn’t a high enough level to do battle with the angry Egyptian pharaoh just yet, being a level or two below her.

Nefertiti sure is a tough cookie, and has a leaping attack move after which she stabs you with her magical knifes, which can take off a serious chunk of your health bar.

The good thing though, is that unlike the boss fights in the main game and the earlier Hidden Ones DLC, in which I faced boss enemies which were more annoying than tough, the major fights here reward skill, preparation and getting to know your opponent’s different attacks in order to succeed, and are more rewarding as a result.

Aside from the undead pharaohs, there are other powerful enemies to contend with in the afterlife. These include high-level Anubis guards that are harder to take down than the average enemy, plus also priests of Anubis that can resurrect their kin. This adds an element of strategy to these encounters, as you will have to make it a priority to take these guys down before they revive their fallen comrades.

Other supernatural creatures you will face here include giant scorpions, which as you might have seen in movies like Clash of the Titans are vulnerable to fire here too, and are as fun to take on as other enemies in this DLC. Of course you’ll have to be ready to take on pharaoh Akhenaten himself at the end of this DLC, in what is the toughest fight in the game no doubt.

But even while taking part in all these exciting fights, though, it’s hard not to notice how pretty Curse of the Pharaohs looks. Like was the case with the main game, the new region of Thebes seen in this expansion looks stupendous, with great lighting, shadows, textures and distant detail. Actually, there’s a life-like level of detail here that might warrant stopping for a while in order to soak in the visuals, so great Assassin’s Creed Origins’ ancient Egyptian world looks.

Also, there are plenty of superbly-produced cutscenes that advance the story, with protagonist Bayek and other characters such as an Egyptian priestess looking great in these. The character models here are a far cry from those in earlier Assassin’s Creed games, with the blocky faces and polygonal bodies seen in the time of Ezio Auditore having been banished for good. 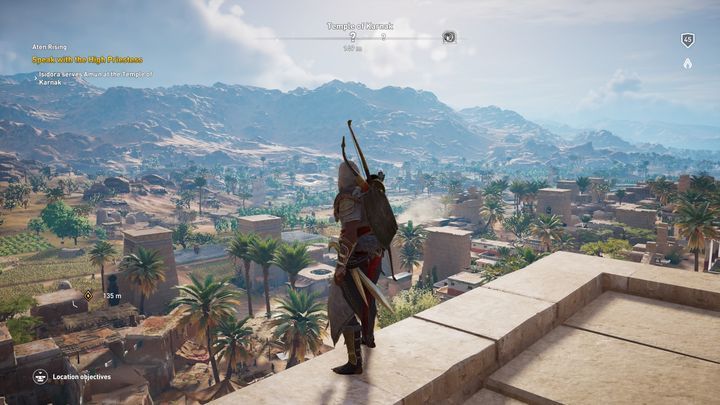 Taking a better look at Thebes… Assassin’s Creed Origins’ Curse of the Pharaohs DLC is one of the best-looking games around.

But no matter how good the game looks, it’s also great we get to hear more of Sarah Schachner’s music here. Aside from the music heard in the main game, there are new themes in this Curse of the Pharaohs DLC, and the music overall really does adds to the experience of playing this DLC. Like in the original game though, some of the voice acting does leave a bit to be desired truth be told.

Another slight flaw is that some quest objectives can be a bit boring at times, such as one occasion in which you are tasked with burning animal carcasses at a cursed farm, and another in which you are required to smash jugs of tainted wine in order to appease the restless pharaohs of Thebes…

And things can be a bit too much sometimes, despite the fact that quests in general are well-designed and fun to play through. Actually, as you play through this expansion, Egyptian gods such as Apep and plenty of characters such as a blind oracle are introduced, many of whom you won’t be dealing with again after the quest in question is done. And items you might have trouble naming afterwards are bandied about all the time too (does the amulet of Khepri ring any bells?).

The great number of characters, locations and items in the game can sometimes be a bit confusing, but since you can simply follow quest markers to reach your goals, and each quest is divided in to simple objectives, this is not so much of a problem. And overall, this DLC is more about enjoying the atmosphere and rich locations than plot or characters, even if the latter surely are as good as they were in the main game.

Also, I wished there was a bit more humour here, as aside from one quest in which you’ll help out a guy in crocodile gear pretending to be the Egyptian god Sobek, this adventure is not played for laughs most of the time.

In the end, though, these are all minor niggles in what is a terrific experience overall, and it’s impossible not to recommend Curse of the Pharaohs to any Assassin’s Creed fan who enjoyed Assassin’s Creed Origins last year and the earlier Hidden Ones DLC too.

This is because Curse of the Pharaohs not only is one of the best expansions released for an Assassin’s Creed game to date, but also wraps up Bayek’s adventures in style, and definitely leaves me wanting to find out whether the series is headed next. For the time being though, it’s clear Curse of the Pharaohs is one of the tastiest treats gamers will enjoy this year, no doubt.

Assassin’s Creed Origins: The Curse of the Pharaohs DLC

→
Next: A Monster Hunter movie with Milla Jovovich begins shooting this year