Back in 2012, Ubisoft delighted action game fans with Far Cry 3, an open-world action shooter set on a tropical island which arguably was the best game released that year. Several more Far Cry games have been released since then, while the series made it to current-gen consoles in 2014, but the great Far Cry 3 had been confined to last-gen consoles and PC until now.

Not anymore though, as French video game company Ubisoft has now released Far Cry 3 Classic Edition, a re-release of its classic shooter for current-gen consoles.

This tells the story of Jason Brody, a man who’s gone skydiving with a group of friends above Rook Island, only to be captured by a ruthless band of pirates led by their insane leader Vaas Montenegro, a man who’s fighting with warrior priestess Citra and her Rakyat tribe for control of Rook Island (the game’s setting).

Once in the game proper though, it doesn’t take long to notice that this is simply a port of the original game for PC, and neither the graphics or audio have been remastered for this release. This is still a cut above the original Xbox 360 and PS3 versions of the game nonetheless, and it roughly matches the PC version running at the highest settings. Frame rates are smooth most of the time too, except in a few locations where I experienced a noticeable slowdown (these include Citra’s temple, which serves as headquarters for the game’s Rakyat tribe).

Regarding the audio, this is still a game that sounds great overall, even if some of the weapons don’t sound as punchy here as in the PC version, although this is only a minor niggle.

But despite the fact Ubisoft did not remaster the graphics, this is still a pretty-looking game through and through. Rook Island’s lush vegetation, winding valleys, dense forests and sandy beaches make for some great scenery, and sometimes I would take a break from all the mayhem simply to gaze at the beautiful vistas.

Actually, simply exploring the island on foot, or grabbing one of the game’s vehicles and racing through Rook Island’s roads, soaking in the scenery, can be a remarkable experience. There are also hang gliders available throughout the islands which you can ride, letting you admire the view from the sky too. 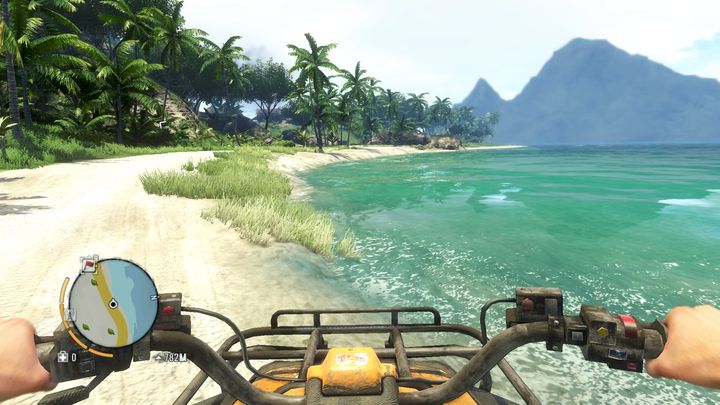 There are plenty of pretty sights to enjoy on Rook Island.

It’s also possible to survey your surroundings using the game’s binoculars, a gadget which has been a staple of the series since the original Far Cry hit shelves in 2004. Of course, while exploring Rook Island and enjoying its sights can keep you busy for a while in Far Cry 3, there’s also plenty of action to enjoy here, and here your binoculars come in handy too.

Using binoculars to tag enemies makes it easier to deal with threats in Far Cry 3, and this is also something that has carried into the newer games too. Once tagged, you can see enemies behind obstacles (they appear as a coloured silhouette) while an icon above their heads shows the enemy type (sniper, heavy, etc) making it easier to plan your attacks.

This comes in handy when assaulting enemy outposts, which you can locate by looking for smoke columns in the game world, while these are also marked on the map for you too. Taking over outposts is a recommended optional activity as liberating these and seizing them for the Rakyat tribe will free the nearby area of pirate presence, letting you explore and engage in other side activities without those pesky pirates harassing you at every turn.

Assaulting the game’s outposts is also an activity that rewards a stealthy approach. While you can always go in guns blazing, this is not a recommended approach most of the time as some of the harder outposts are heavily guarded and feature powerful enemies wielding weapons such as flamethrowers that can make short work of protagonist Jason if you take the direct approach.

Also, enemies can ring an alarm and call for reinforcements, making your job harder. It pays to go in quietly and disable the alarms first to prevent this, then, while taking down enemies from behind using a knife is also the preferred approach here.

This doesn’t mean that there are no shortage of spectacular firefights in Far Cry 3. Enemy AI is quite sharp most of the time too, and they will resort to evasive manoeuvres and even attempt to surround you and go for the kill, so it’s a pleasure to dispatch your foes with the variety of weapons available. These include assault rifles, rocket launchers, shotguns, sniper rifles and even flamethrowers, the latter of which you make good use of in one of the game’s best missions. 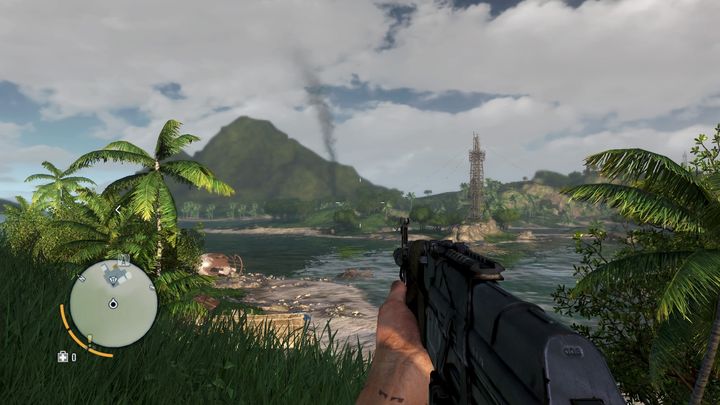 Initially though, Jason is only able to carry one of these weapons at once, and therefore upgrading his weapons holster is necessary to carry more guns at a time. This involves hunting and skinning animals such as goats in order to craft a bigger weapons holster, which will allow you to carry more weapons.

Hunting and crafting in Far Cry 3 can feel tedious at times, and it also reminds me how this aspect of the game has been replaced with better systems in the franchise’s latest entries. But still, you can make hunting less of a chore by resorting to special syringes (which you also have to craft) which when consumed make it easier for you to hunt the critters and skin them.

Another key aspect of Far Cry 3’s involves the radio towers which are interspersed throughout the map. Climbing these is a worthwhile optional activity, as these are entertaining platforming puzzles that take quite a bit of skill in most cases, plus it’s always rewarding to reach the summit of these hulking steel behemoths.

Reaching the top and disabling the transmitter will also clear the surrounding fog of war, letting you see the location of vehicles, animals and items such as chests on the map, and also that of side activities such as the Supply Drop quests will appear marked on the game’s map.

The Supply Drop quests are races which require you to reach a predetermined point, rushing through a series of checkpoints before a timer runs out, and are a fun side diversion for those looking to satisfy that need for speed.

There are no shortage of activities to take part in Far Cry 3’s open world aside from the Supply Drop quests. These include the Wanted Dead quests, which task you with killing an enemy commander with a knife, and therefore put an emphasis on stealth rather than all-out gunplay. Other side activities include hunting for relics hidden throughout the island, something that will surely keep those who like to explore every nook and cranny busy for a while.

But no matter how much fun the game’s open world activities are, the main story missions and characters sure are a highlight here.

It’s clear Rook Island has seen better times, and the South Pacific island is a war torn place on which the Rakyat tribe is suffering under the tyranny of villain Vaas and his pirates. And Vaas sure is one of the top video game baddies of all time, an unpredictable and dangerous lunatic who steals every scene he’s in. 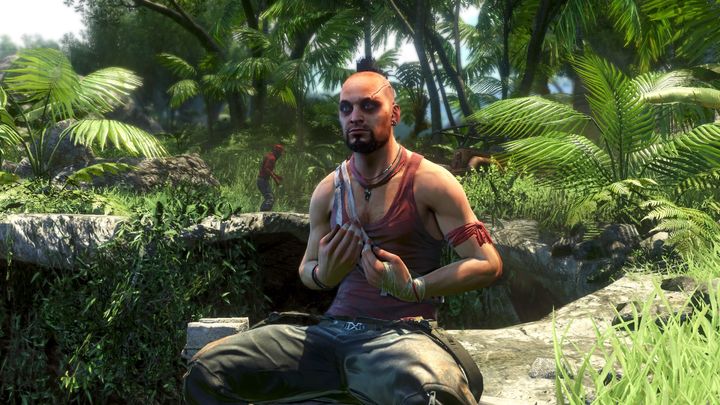 Vaas sure knows the meaning of insanity…

Sadly, he is gone by the game’s last third, only to be replaced by another good, if not great, villain, whom you get to take out in a sadly disappointing quick time event fight.

There’s also Citra, the sexy leader of the Rakyat tribe and Vaas’ sister (whom the latter sure has a grudge against) and one of the game’s best characters too.

There are other damaged personalities on the island too, such as the deranged Dr. Earnhardt, someone whom protagonist Jason meets early on and who’s seeking refuge on Rook Island after losing his daughter in an accident, and Dennis, a former mechanic who joined the Rakyat looking for a new start on the South Pacific island.

Another character worthy of mention is Buck, a ruthless mercenary who’s got one of Jason’s friends captive, and who will send you on a series of missions involving the search for a mystical knife Citra is also after. These missions take place indoors and involve a mix of platforming action and shooting, and certainly would not be out of place in a Tomb Raider game (if Tomb Raider was played in first-person, that is).

All these characters are superbly voiced, with Michael Mando’s Vaas surely being the highlight, overall Far Cry 3 surely is one of the best voice acted games released in the last couple of years for sure.

There is a caveat though, and the game’s over-talkative protagonist might end up being grating for some after a while (which may be one reason why Ubisoft might have settled for a silent protagonist in the more recent Far Cry 5) even though I found Jason Brody a likeable character overall.

The battle between Jason and Vaas sure is a central point in this story, even if clearly part of this does play out in Jason’s mind. Actually, Far Cry 3’s dream sequences are one of the game’s highlights, and Jason’s drug-fuelled hallucinatory sequences include a fight against a giant demon using bow and arrow, and a dreamy tour revealing his friends’ fate on Rook Island and his future search for a mystical knife. There are also a series of flashbacks set in a nightclub which take place before his arrival on the island and capture by Vaas’ pirates, amongst others. 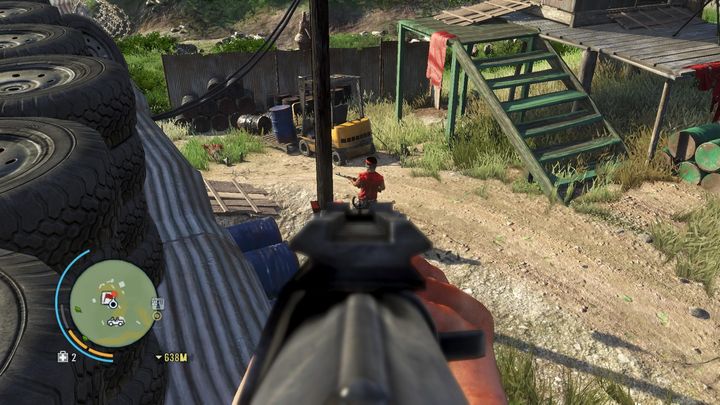 Being stealthy always helps when trying to take over outposts in this game.

And taking into account that quite a few bits of the game play out in Jason’s mind, it’s not hard to think that Vass himself could very well be a figment of Jason’s imagination, but then again he might not… The game’s story does play a bit with the idea of what might be real and what not, which sure is a nice touch.

So, is Far Cry 3 Classic Edition the definitive way to play Ubisoft’s shooter classic? Given that this is more or less equivalent to the PC version with poorer frame rates, plus slightly less pretty visuals in places, and also taking into account that the multiplayer has been excised from the game, the answer is not quite.

Also, there’s a minor graphical glitch which occurs at times when scrolling the map, causing it not to redraw properly (parts of the map you have already uncovered are shown as if you had not climbed and activated the radio tower in question). Far Cry 3 Classic Edition also includes the DLC released for the game (Lost Expeditions and Monkey Business) which isn’t so great to justify the purchase on its own.

Those yet to play this action classic have little to lose by picking this up though, as this is one of the best games released in the last decade, while this PS4 port is a perfectly fine way to enjoy Far Cry 3, even if it does offer little over the last-gen console versions which came out back in the day.

Available on: PS4 | Xbox One

DISCLAIMER
This game was reviewed using a copy purchased for the purpose of this review.
→
Next: A limited edition of the PS4 Pro goes on sale this week