It makes sense that Ubisoft has based this first DLC for the recent Far Cry 6 on Far Cry 3, as the classic 2012 shooter is considered by many to be the best game in the series to date. And while previous Far Cry games have been set in exotic locations, this DLC takes place in the mind of Vaas Montenegro, the iconic villain of Far Cry 3.

It also takes the form of a “die and restart” game, borrowing ideas from the roguelite genre as well as Bethesda’s 2021 game Deathloop.

As stated earlier, instead of continuing the story of Far Cry 6 with this DLC, Ubisoft puts you in the shoes of the villain of Far Cry 3. An advantage of this is that you need not have finished the latest Far Cry in order to enjoy this Vaas: Insanity DLC, although your enjoyment of it will definitely be greater if you’ve completed Far Cry 3 (which any Far Cry fan worth his salt obviously has, of course). This also means that the experience will be a bit “spoilery” for those who haven’t played the earlier game too…

Actually, this DLC begins with a recreation of one of Far Cry 3’s key scenes: the killing of Vaas by Jason Brody, the latter being the protagonist of the earlier Far Cry 3.

It is after this that Vaas’ “dream” begins (his mind enters the afterlife or something like that), and you’re thrust into an open-world island setting.

The DLC starts in the compound (Vaas’ base of operations in Far Cry 3), where you have a mirror available which lets you acquire “permanent traits”. The first one you get grants healing syringes which replenish over time. There is also a weapons locker like in Far Cry 3 from which you can buy and upgrade weapons, although the basic pistol is always free.

The healing syringes mentioned earlier come in handy during firefights, which truth be told, can be quite difficult. This is especially true at first, as you are only armed with the pistol initially. Nonetheless, you can get better gear by completing the game’s “armory challenges”. These are available at certain points in the map, and task you with killing a certain number of enemies within a confined area (leaving the area will lead to you failing the mission). 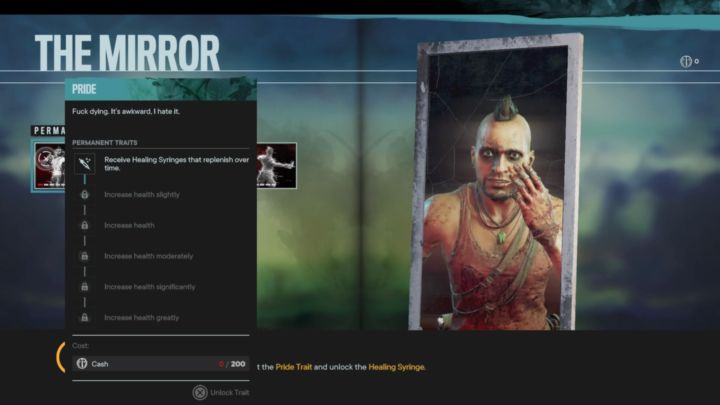 You can acquire permanent traits for Vaas in the mirror.

These firefights are pretty intense (and difficult as stated earlier), and I found myself taking cover often. You definitely won’t be able to approach these encounters “Rambo style”. Plus, enemies will also lob grenades at you if you stay in cover too long, meaning I had to keep constantly on the move until I managed to kill the required number of enemies in order to complete the challenge.

Completion of the first armory challenge (the one closest to Vaas’ compound) grants you the bow, which as in Far Cry 3 (and in 2021’s Far Cry 6) is one of the best weapons for stealth killing enemies. I did not get to kill many enemies stealthily in this Far Cry 6 DLC, though, even if it’s still satisfying to do so with the bow before you’re seen. It was mostly all-out firefights here, which as stated earlier can get quite difficult, as enemies also seem to be quite good at taking cover and flanking you, adding to the challenge.

Also, whenever you die, Vaas will reappear at the compound, having lost most of your cash, all your weapons and “power” too (more on this later). You can keep more cash after dying by unlocking permanent traits in the “greed” category. Permanent traits are grouped in categories named after the deadly sins (envy, wrath, greed, etc…), a nice touch which feels absolutely right taking into account you’re in control of a crazy villain like Vaas.

That aside, cash is also needed to buy weapons at the locker in the compound. You can buy weapons you’ve already unlocked, although you can complete the corresponding armory challenge again if you’re short on cash in order to get hold of the weapon.

But going back to the traits, most of these are not necessary to finish this DLC (and some are not that useful such as one which slightly heals you after takedown kills), although another which grants you access to the wingsuit, parachute and grappling hook is actually necessary to complete the game.

The grappling hook lets you climb to a part of the island leading to one of the game’s story missions taking place in Citra’s temple. Those who have played Ubisoft’s Far Cry 3 game know that Citra is Vaas’ sister and leader of the Rakyat tribe which had become the mortal enemy of Vaas and his pirates. Actually, the enemies you face on the island (except the animals, of course) look like zombie versions of the Rakyat warriors from Far Cry 3. 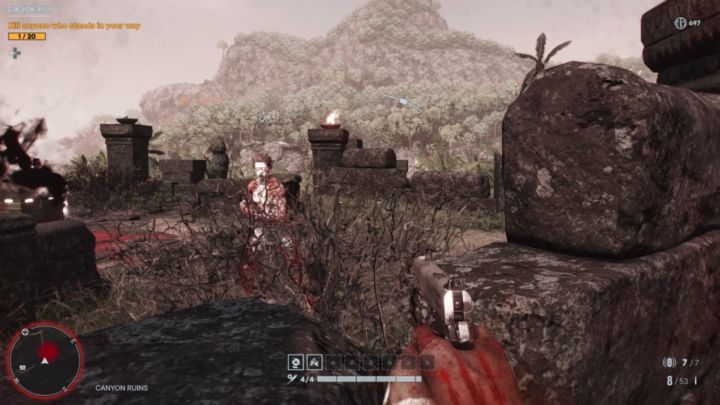 There are some pretty intense firefights to enjoy in this DLC.

Citra is the main antagonist here, though, and Vaas hears her voice in his mind often during this adventure, both criticizing him for his life’s failures but also wanting him to be his warrior, something which fits into their love/hate relationship and reveals more about the series’ iconic villain.

Of course, there’s also Jason Brody, the protagonist of Far Cry 3 who’s a ruthless adversary here, and you actually get to fight several versions of him at the same time in this DLC…

And if side activities are quite hard here, so are the story missions (which the game calls “memories”), each taking place in one key location from the original Far Cry 3 game, such as Citra’s temple. You have to complete each memory to receive a piece of the “silver dragon blade”, and then head back to the compound for the final encounter.

Completing the memories just involves killing wave after wave of enemies while you complete another goal (such as freeing prisoners from cages) and are hard to finish the first time around when you’re only armed with the gun and nothing else.

Things get easier when you have access to the more powerful weapons such as the rifle, but even then the roguelite, “die and restart” nature of the game can lead to frustration: after completing all the story missions (the three memories) I was heading back to the compound for the final encounter, but hit the ground after having flown some distance with the wingsuit, having to start all over again…

Thankfully by this time I had unlocked most weapons and gotten the most desirable traits for Vaas (which are permanent as explained earlier). It still took a couple of hours to play through the story missions and beat the final encounter, which just involves mowing down wave after wave of enemies until you can escape Vaas’ mind. It’s not particularly great, but it did remind me of a much better encounter in the classy Far Cry 3. 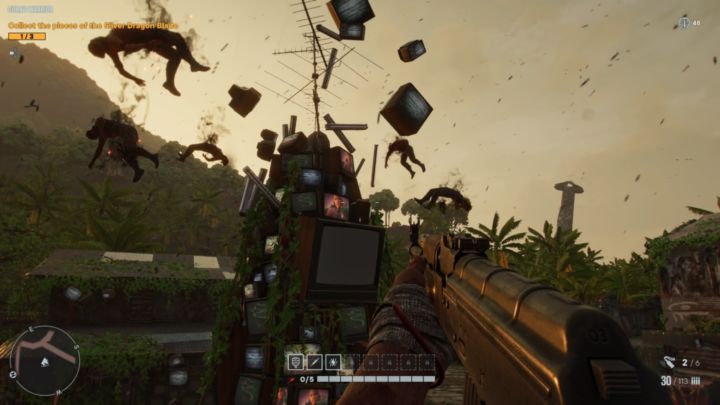 There are some disturbing sights in this Vaas DLC.

Of course, you can plow through the story missions or memories quickly and be done in less than three hours, but there is enough content here to keep you busy for at least five hours or more, even if the map itself is not as big as Far Cry 6’s starting island.

Aside from the “armory challenges” which unlock new weapons for your arsenal, you can also gain access to safe houses by (you guessed it) killing the enemies guarding these. Safe houses give you access to the mirror (which allows you to buy permanent traits with cash as explained earlier) and a weapons locker, letting you spend your hard-earned cash without having to retreat to the compound.

This is a good thing, since except for the wingsuit, there’s no quick way of getting around the island as there are no driveable vehicles of any kind here. There’s a form of fast travel available, though, as Vaas can use special doors found at certain locations which instantly take you to another point of the island.

Another side activity you encounter on the island are “endurance” trials which involve killing more enemies in a confined area. During these Citra’s voice taunts you constantly, but you get to learn more about Vaas and his complicated relationship with his sister. There’s another incentive to ace the endurance missions as you gain “power” items, which you can equip in a power slot, gaining buffs such as your bow dealing more damage, or sell them for cash. This might be a good idea since some of these buffs are not particularly useful. Plus, you lose all equipped “power” items when you die too…

Aside from the side activities, exploring the open-world island will let you enjoy the sights. Some of these will be pretty strange: this is Vaas’ mind after all, and his compound features TVs piled one on top of the other and bodies floating in the air… Actually, anyone who saw you playing might think the game’s creators had gone insane: big floating stones and sharks swimming in the air are commonplace on Vaas’ island, and other disturbing sights are there to be enjoyed too…

A big volcano dominates the landscape and it does look imposing, everything rendered to perfection by Ubisoft’s Dunia engine in this PS4 version of the game. Actually, even ordinary objects like a dumpster in Vaas’ compound have a lifelike quality to them, while the lighting is also great, seeing the evening sun reflecting off the slopes of the volcano is an awesome sight.

Also, the way the palette shifts to grey during some firefights is a cool touch, while Vaas’ visions (which include a reenactment of his “meaning of insanity” of speech) have a dreamlike quality to them. 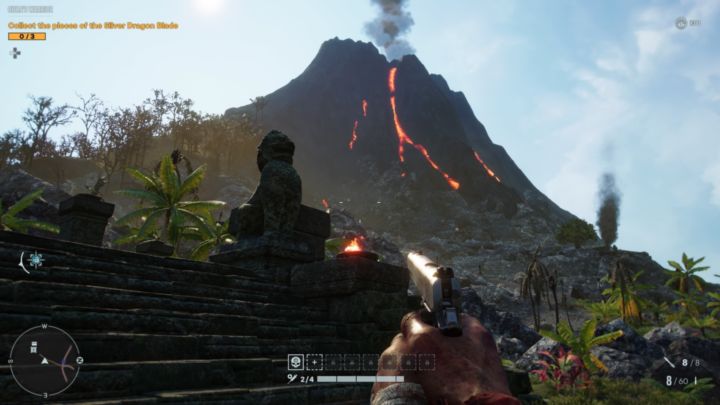 A volcano dominates the landscape, and it all looks impressive.

There’s also a day and night cycle, and ghost-like enemies attack you at night, which I found scary.

Additionally, there’s some replay value due to the different “mind levels” (essentially difficulty levels) which increase the challenge, diary pages to collect (which shed more light on Vaas’ past) and “Chibi” statues to pick up scattered throughout the map. The fact you can unlock gear to use in Far Cry 6 (including Vaas’ tank top and other stuff) might encourage you to have another go at this after the first playthrough.

So, what to make of this DLC? Far Cry fans who enjoyed Far Cry 3 back in the day will definitely want to get hold of this, as it adds to Vaas’ backstory, letting you know more about the top villain in the series.

Those who’ve finished Far Cry 6 and want more can’t go wrong with this either, even if admittedly it’s not an essential purchase unless you’re a fan of Ubisoft’s series though.

DISCLAIMER
This game was reviewed using a copy purchased for the purpose of this review.
→
Next: Star Wars Jedi: Fallen Order is getting a sequel, could launch this year
Share this >
YOU MAY ALSO LIKE
MORE ON LAKEBIT