The new Hitman video game is certainly one of the year’s best so far, even if we haven’t seen everything the game has to offer yet as developer IO Interactive made the decision of releasing this game in an episodic format, with half of the game’s episodes still to come.

These episodes have taken bald assassin and protagonist Agent 47 around the globe to locations like a Paris fashion show, the sunny Mediterranean town of Sapienza and a Moroccan city in the middle of a military coup. In these missions the hitman had to take out high-profile targets like a pair of terrorist fashionistas, a troubled bioengineer, a power-hungry general and a banker turned con artist in Marrakesh.

Aside from the mission’s main targets, players have also been able to take on optional missions in each episode involving “Elusive Targets”. These are high-profile targets that show up in an episode’s location for a limited amount of (real) time only and are gone forever afterwards. Players cannot save during the Elusive Target missions, and are not given any clue as to the target’s whereabouts in the game. So taking out these Elusive Targets is certainly a tricky bit of business…

The game’s first Elusive Target, “The Forger”, appeared in the game’s Paris setting last May, while most recently we saw music celebrity and criminal mastermind “The Sensation” in Paris too. But now Hitman’s next Elusive Target will be none other than celebrity actor Gary Busey, who beat fellow Hollywood star Gary Cole to appear in the game in a fan-voted contest. 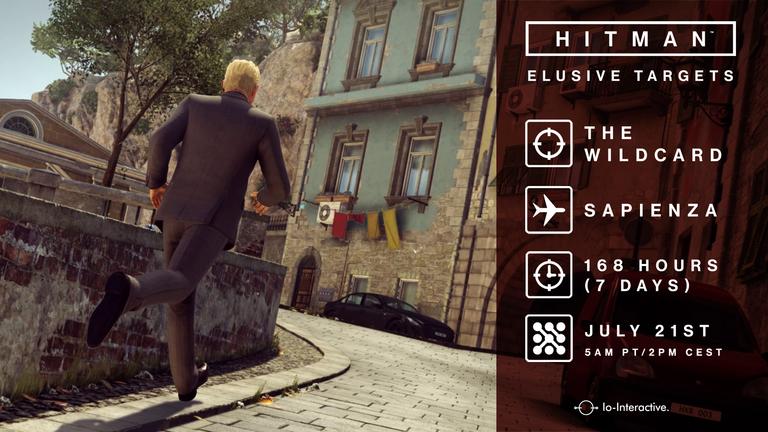 Hitman’s Elusive Target missions certainly add an element of excitement to the game.

Gary Busey is famous for playing the villain in movies like Lethal Weapon and also starred in other films like Point Break and The Firm. And now the actor will appear in Hitman’s Sapienza mission as one of the video game’s Elusive Targets, lending his likeness to a character known as “The Wildcard”. Unlike earlier Elusive Targets though, Gary Busey’s characters will remain in Sapienza for full week starting on July 21, meaning players will have to plenty of time to take care of the contract and deal with “The Wildcard”.

And since these Hitman missions are truly elusive, game creators IO Interactive have released a companion app for the game, allowing players to be informed of when and where Elusive Targets appear in the game, according to Hitman’s official website.

If one thing is clear though, is that picking a celebrity like Busey will surely give players extra incentive to succeed in this mission, which given how high-profile (and famous) the mission’s protagonist is, surely promises to be as hard as earlier Hitman Elusive Target missions have been…