Hitman 3 was one of the biggest games to land in 2021 (and one of the best too). But even though the game shipped almost a year and a half ago, the people behind it have been putting out new content for it regularly since its release in January 2021.

And there’s more to come yet, as Danish developer IO Interactive recently revealed its July roadmap for Hitman 3, which amongst other things features a new map named Ambrose Island (via Eurogamer).

This new location for the game was announced earlier this year but now has been fully revealed in a recently released trailer (see below).

The exact reason why Hitman 3’s protagonist Agent 47 will visit this uncharted island is unknown, but there may be quite a bit of story to tell here as this location will serve as a prologue to the game.

What’s clear is that this tropical island is infested with dangerous pirates, and according to IO’s website Ambrose Island “is packed with new targets, gameplay opportunities, challenges and unlockable rewards”.

Better still, this new location will be free to all owners of Hitman 3 – a DLC-sized expansion for the game courtesy of game makers IO Interactive.

The thing is, it always felt like Hitman 3 needed a proper introductory level, something along the lines of Hitman 2’s Hawke’s Bay level. There’s a brief recap of what happened in the previous two games before the game’s Dubai level, but this Ambrose Island prologue feels necessary to fill the gaps… According to IO, in this location Agent 47 will be able to “help an old friend rectify his mistake”, so here’s hoping for some eye-opening reveals on Ambrose Island, then. 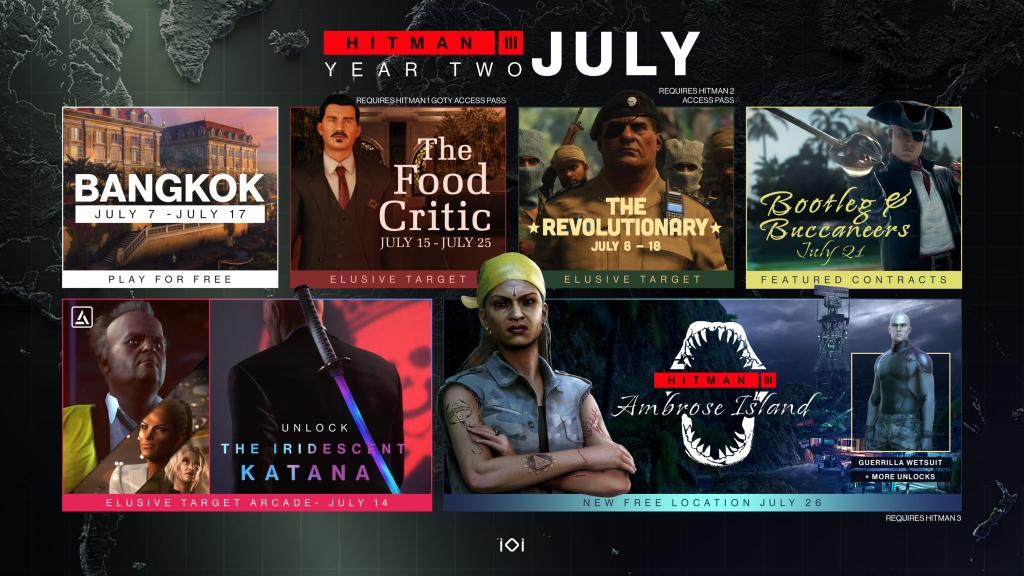 ADVERTISEMENT
Aside from Ambrose Island, the game will also be getting two “elusive targets” this month, although both have already featured in the Hitman series before. Players will also be able to unlock a new weapon for use in any of the game’s locations (the iridescent katana) via the “elusive target arcade”. Plus, the game’s Bangkok location will be available to play for free between July 7 and July 17 too.

All in all, this surely is a great excuse to go back to Hitman 3 if you haven’t played the game in a while, and if the new island location turns out to be as high quality as the others featured in the game, all the better. This might even help IO Interactive sell more copies of Hitman 3, which remains the series most successful entry to date.

→
Next: The GeForce RTX 4070 could be Nvidia’s best graphics card ever if rumors are proven true