Although Hitman’s first episodic season is now officially over, this has not prevented Danish studio IO Interactive from putting out more content for its game.

And the upcoming August content update does make a few interesting additions to Hitman 2016, chief of which are 5 new challenges for the Hokkaido mission (episode 6). What’s interesting here is that completing these challenges will not only grant you more experience points (which contribute towards increasing your mastery level for this location), but also a unique in-game item, which IO says it will reveal next week. This comes in the wake of July’s big update, which also made several noteworthy changes to the stealth and assassination game.

Much to the delight of Hitman fans, IO also teased that future game updates are in the works, and that “some exciting new announcements” are in the way too. 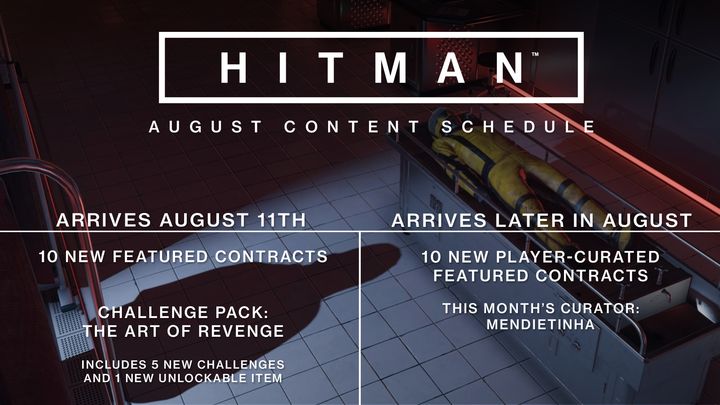 ADVERTISEMENT
So, does this mean that a season 2 of Hitman is now in development, and that we will hear about it soon? This may be the case, but as I’ve argued before, IO should consider dropping the episodic model for Hitman, as it clearly wasn’t the success the studio was hoping for last year. And it’s likely that publisher Square Enix thought as much, as it decided to dump the Danish studio in May this year.

But still, IO recently announced that Hitman 2016 has surpassed the 5 million players mark, meaning the game has still managed to reach a significant number of players (although obviously this does not translate to copies sold, and may have to do with the fact that the training missions are now free to play), meaning the Copenhagen-based studio could still be going for an episodic release for the next Hitman game nonetheless.

Hopefully, though, future games in the series will be as great as the Hitman reboot was last year, a game with beautiful locations, superb atmosphere and great gameplay, which arguably is the series best to date.

→
Next: You can play Ghost Recon: Wildlands for free right now on PS4 and Xbox One