Marvel’s Avengers hasn’t been a hit for Square Enix, but the company still has plans for the game
↑
SHARE
TWEET

The Avengers movies have been a huge hit for Marvel, with these making billions for the company at the box office worldwide. Actually, Avengers: Endgame made a whopping 2.8 billion US dollars in cinemas the world over last year. Not a small chunk of change, no matter who you ask.

So when Japanese video game company Square Enix announced it was making an Avengers video game back in 2017, plenty of people were excited. Many were expecting this to be as big a hit as the movies had been. Also, the fact that renowned video game studio Crystal Dynamics was behind the game did a lot to inspire confidence. These are the people behind the Tomb Raider games, after all.

Things did not go as planned for Square Enix at release, though, with the game getting mixed reviews and an aggregate score of 67 on Metacritic for the PS4 version – definitely not a good sign for a big AAA release based on a major movie franchise like The Avengers.

But that wasn’t the end of Square Enix’s woes, as it seems that Marvel’s Avengers simply has not sold very well, with Square yet to recoup the game’s development costs, as was recently reported on Forbes.

Square Enix president Yosuke Matsuda said in a recent investor briefing that his company is looking to make up what it spent on advertising as well as development by growing sales of the game.

“We undertook a major advertising campaign at the time of its [Marvel’s Avengers] launch to make up for delays in our marketing efforts resulting from the COVID-19 pandemic. There is a certain amount of development costs still to be amortized in 3Q, but we want to recoup it by growing our sales going forward”, said Matsuda.

And early last month Eurogamer reported that Marvel’s Avengers had missed its sales target by quite a bit. According to game analyst David Gibson, who’s based in Tokyo, the game only shifted about 60 % of expected volume, having sold about three million copies by November this year.

However, Square Enix is not giving up on the game, and its plan is to keep interest in Marvel’s Avengers alive going forward. They’ll do this by releasing extra content for the game, including new playable heroes such as Black Panther and Kate Bishop, with the latter coming to the game on December 8. 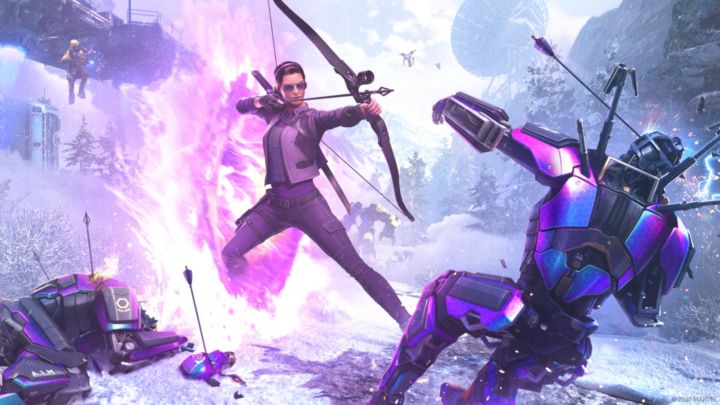 Kate Bishop is one of the new heroes coming to Marvel’s Avengers.

This is similar to what developer Hello Games did with its space combat and exploration game No Man’s Sky. After a disappointing release in 2016, it sat down to improve the game by releasing major content patches throughout the years, meaning No Man’s Sky 2020 is a radically different (and much better game) than what it was back in 2016. This has driven sales of the game throughout the years, and allowed Hello Games to keep selling the game at full price on PC.

Now Marvel’s Avengers is an entirely different beast, being tied as it is to the Avengers license, so it remains to be seen whether Marvel chooses to be patient and waits for Square Enix and developer Crystal Dynamics to improve the game and reach its sales targets (or not) as Forbes points out.

But regardless of whether Marvel’s Avengers can pull off a No Man’s Sky or not, one consequence of the development of this superhero game is that people did not get to see the conclusion to the Deus Ex series of video games. This is because after releasing the disappointing Deus Ex: Mankind Divided, Eidos Montreal got to work on the Marvel’s Avengers game together with Crystal Dynamics, ceasing to release any further updates for Mankind Divided and indefinitely postponing a third Deus Ex game, which reportedly was in the works (but might not have been completely canned yet).

And going back to Marvel’s Avengers, Square Enix is yet to release PS5 and Xbox Series versions of their superhero game. These versions of the game have been delayed and are coming next year, and this could lead to further sales of the game.

Of course, even if Crystal Dynamics and the other teams working on Marvel’s Avengers fail to turn things around, there’s little chance Square Enix will chose to get rid of Crystal like it did back in 2017 when it choose to let go of Hitman developer IO Interactive. Crystal Dynamics’ Tomb Raider games have been much too successful to let the studio go.

Either way, here’s hoping that Marvel’s Avengers gets to shine in the weeks and months to come as new content updates arrive, and the PS5 and Xbox Series X versions of the game see the light sooner rather than later too.