House Party caused something of a stir in 2017. This is because this game by developer Eek! Games had the moral guardians up in arms due to its adult content, leading to it being banned from the Steam store.

The ban, though, was only temporary, and the game ended up back on Steam in a mildly censored form after some had called the point and click adventure and social sim hybrid “pornographic”, perhaps unjustifiably so.

Since then, developer Eek! Games has kept adding content to the game via updates, even if it still has not delivered on its promise of giving the game a full release – House Party is still on Steam’s Early Access, meaning it cannot be considered a complete, finished game but still a work in progress.

This has not prevented quite a few people from picking up the game, though, as Eek! claims to have sold more than 800,000 copies of the game (which shows how popular the game has become) while also announcing that House Party is getting its biggest update yet.

The biggest addition here is a new storyline for Frank, one of the game’s characters, while new gameplay opportunities have also been added to the game in this update.

“Frank’s storyline comes with a massive chunk of gameplay, a major branching ending depending on your decisions at the party, and five all-new Original Story Opportunities. As an added bonus, we’ve improved our Opportunities UI, so now you’ll not only know which Opportunities you’ve discovered, finished, or failed, but also which ones you might’ve missed along the way”, said Eek! Games in a press release. 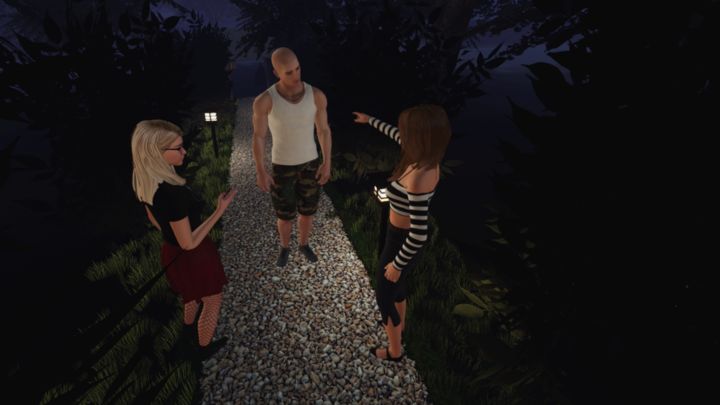 Frank gets to hang around with the ladies in the latest version of House Party.

Meanwhile, characters like Katherine, Rachel and Vickie will get specific ending cutscenes each in this update while the game is also getting a “brand new cutscene-style intimacy system”. There are also new items to find in the house according to game creators Eek! Games, some of which will help you progress in Frank’s story, which at some point involves challenging another of the game’s characters to a dance-off…

Also, Eek! Games plans to keep updating House Party, fixing bugs in the game and also bringing new content to it such as “fan-requested female POV storylines” amongst other things.

As stated earlier, though, the game remains on Steam’s Early Access program, but those who are looking to dive into the House Party experience will be glad to know that Eek! is planning a full release of House Party by March 2022. But taking into account that the game was originally scheduled to leave early access in summer 2020, a delay is still possible.

Nonetheless, House Party’s success despite it being an early access game shows that demand for adult-oriented games on Steam keeps growing, even if this might not be to everyone’s liking. But no matter how controversial Eek! Games’ game has been since its launch a couple of years ago, it’s clear that House Party fans will cherish the game’s latest update, especially now that the game’s full Steam release is on the horizon.

→
Next: Call of Duty meets Until Dawn in Supermassive’s next game