It would be an understatement to say that The Witcher 3: Wild Hunt caused a sensation last year, as CD Projekt’s game sold millions of copies worldwide and also won multiple game of the year awards. And even the game’s expansion Blood and Wine, which was released this year, won the best role-playing game award at this year’s Game Awards show, which is certainly no mean feat.

One of the things The Witcher 3 had going for it was its focus on mature themes, and also the fact that protagonist Geralt was portrayed like a real human being with needs and desires, with the game featuring several romantic scenes involving Geralt and his love interest Yennefer, plus Geralt being the ladies’ man he is also gets intimate with other women throughout his journey too… This made The Witcher 3 a controversial game too, but it is clear that gamers loved the game’s adult angle no doubt.

And the newly available Witcher Cosplay Calendar 2017 focuses on the game’s saucier side as reported on PC Gamer, featuring shots of real-life actors portraying scenes from the game such as Geralt’s and Yennefer’s love scene on a unicorn (see below) and also Geralt’s bathtub scene seen in the early moments of the game. 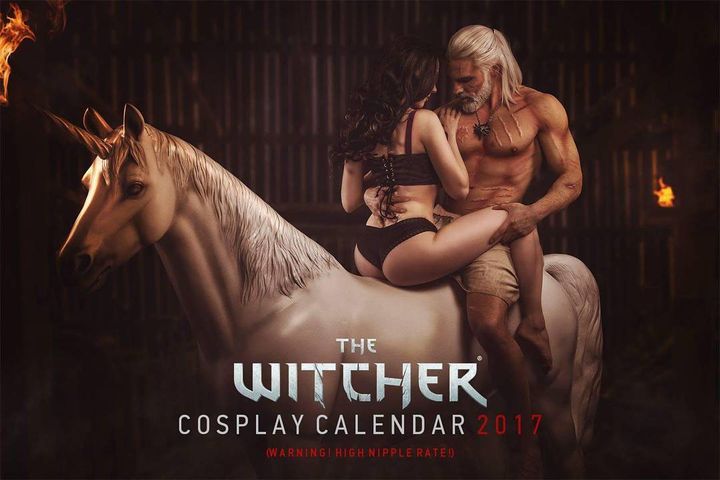 The Witcher Cosplay Calendar 2017 is now available for ordering here, and is likely an item devoted Witcher fans will want to get hold of, while those fond of CD Projekt’s Witcher games also have the movie adaptation to look forward to, which is slated to hit the theatres sometime in 2017.

→
Next: GTA Online celebrates Christmas with free goodies and discounts