Many fans of Ubisoft’s Assassin’s Creed series were disappointed when the French video game company revealed that no major game in the series would be released this year, making 2016 the first year since 2008 without a big Assassin’s Creed video game release.

Assassin’s Creed fans did get the Chronicles spin-off set in Russia this year though, and those fond of gaming on the go got the Assassin’s Creed: Identity mobile game this February, and there’s also director Justin Kurzel’s Assassin’s Creed movie coming this fall (December 21 to be exact), which might still turn out to be a good film, even if movies based on video games have rarely turned out to be great. And regarding Assassin’s Creed silver screen debut, even an Ubisoft executive admitted they did not expect the movie to be a financial success, but did hope it got more people interested in the video games…

This clearly means that Ubisoft has obviously not abandoned the idea of making more Assassin’s Creed games, but taking into account that the series has sold millions of copies worldwide and become a cash cow for the French company, will Ubisoft consider releasing a remastered edition of the Assasssin’s Creed games?

The likes of Assassin’s Creed IV: Black Flag (which is one of the highlights of the series and a stupendous game in its own right) was already released for new-gen consoles in 2013 and obviously wouldn’t need to be remastered, but earlier games like Assassin’s Creed III, Assassin’s Creed II and its spin-offs and the original game could receive the remaster treatment.

Other top video game franchises like Uncharted and God of War have been released in remastered form, while a remastered collection of the Bioshock games is coming in September, and a special, remastered edition of the RPG classic Skyrim will hit the shelves this October. 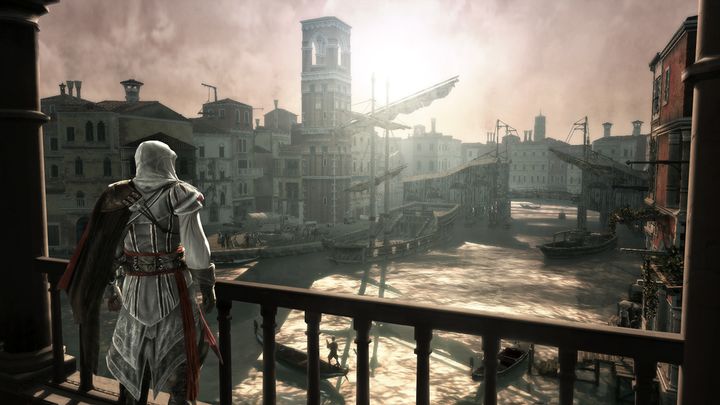 How good would a new-gen remaster of Assassin’s Creed II look?

And clearly the Assassin’s Creed games would be good candidates for the remaster treatment, given the sumptuous visuals and graphical detail of these games, which would certainly look incredible running on new-gen consoles like the PS4 and Xbox One. This would clearly be the case for the Assassin’s Creed II video game, which had beautiful recreations of Renaissance cities like Florence and Venice, and also great character models and art.

Although if something suggests a remastered release of earlier Assassin’s Creed games is not so likely is that both the original Assassin’s Creed and Assassin’s Creed II are now on Microsoft’s backwards compatibility list for the Xbox One, which is something Ubisoft would have likely not had an interest in allowing if it was planning to release remastered editions of these games sometime down the road.

Plus it can also be argued that it’s always better for developers to focus on making new games rather than remastering the old, even if remastered editions certainly are a boon for those who never got to play the game in the first place.

→
Next: Will Nintendo’s mobile approach with the NX work in today’s console market?