One of the most shocking bits of news video game fans got to hear this year was Square Enix’s announcement that it was planning to rid itself of IO Interactive, with the Japanese publisher making the decision to put the Danish studio up for sale. Of course, IO is the outfit behind the popular Hitman series of video games, which has even graced the silver screen on two occasions, even if the more recent Hitman: Agent 47 movie turned out to be a critical and commercial flop.

So what prompted Japanese publisher Square Enix to put the studio up for sale? At the time the publisher said this was part of the company’s desire to focus its “resources and energies on key franchises and studios” and its bid to “maximize player satisfaction”. Either way, Square Enix’s bid to rid itself of IO was still shocking to many, as their latest Hitman game is arguably the best in the series to date, and was also one of last year’s finest releases too.

And a possible result of Square Enix dumping IO Interactive (which quite a few fans of Hitman had feared) was that the Japanese company would get to keep the Hitman IP while selling IO to another publisher, meaning the series would have ended up stuck in limbo, or perhaps took another, completely different direction in the future.

There was a glimmer of hope in early June though, when Square Enix president Yosuke Matsuda said during a press conference that given that IO had several projects under way, Square Enix was “negotiating with prospective external investors capable of ensuring that these titles carry on”. This meant that Square was willing to sell the studio along with its IPs like Kane & Lynch and Hitman, making fans hopeful that the series would continue in the future and be developed by the studio that gave birth to Agent 47…

In the end, though, the outcome has been slightly different, and developer IO recently announced that it actually was buying itself from Square, and that it had become independent once again. “I am proud to announce today that IOI is now officially an independent studio. We have successfully concluded our negotiations with Square Enix and have agreed to a management buyout” said CEO Hakan Abrak. IO’s boss also added that the Danish outfit “will keep all of the rights to the Hitman IP”, and that IO is now “open to opportunities with future collaborators and partners to help strengthen us as a studio and ensure that we can produce the best games possible for our community”.

Despite this, though, many might be wondering now whether IO Interactive can survive without the backing of a major publisher. After all, its now former owner Square Enix is one of the biggest video game publishers in the world, and the home of big-name franchises like Final Fantasy and Deus Ex. Square’s revenue was a whopping $1.7 billion in the last nine months of 2016 according to Game Informer, and has renowned studios like Eidos Montreal and Crystal Dynamics under its fold.

Actually, looking at Square Enix’s numbers, it may at first be difficult to understand why the Japanese publisher would dump IO despite finding much success of late. This likely has to do with their latest Hitman video game not selling so well despite being so well reviewed last year, and despite the fact most Hitman fans did have nice things to say about 2016’s reboot.

But the truth of the matter is that stats available on steamspy.com reveal that less than 1 million people own the PC version of the game, while unofficial console sales data on vgchartz.com suggests Hitman 2016 did not shift that many copies on console either. By contrast, its previous game (2012’s Hitman Absolution) sold more than 3 million copies.

Was the episodic release model to blame? 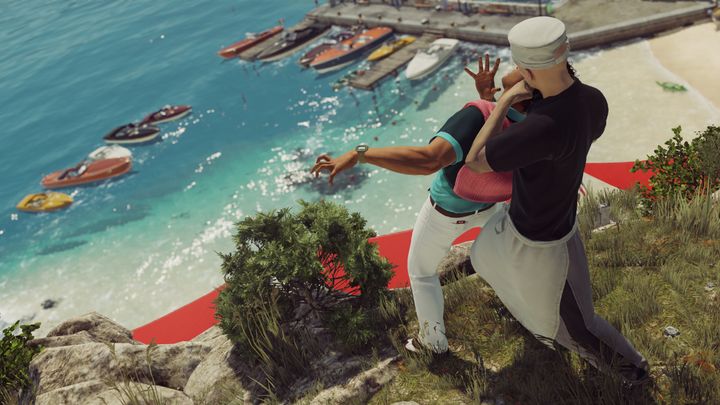 Although Hitman 2016 had some wonderful episodes like Sapienza (pictured) perhaps IO Interactive should dump the episodic model now that it’s gone independent again.

The reason behind the poor sales could have been IO’s decision to go for an episodic release model with their latest Hitman game, with the game’s first episode coming out in March 2016 and last one (which was set in Japan) becoming available for purchase in November 2016. IO also put out the complete first season package in early 2017.

It’s likely, though, that making this Hitman game episodic may have caused a bit of confusion. This is because those not familiar with the Hitman series might have thought this was an expansion or add-on for an earlier Hitman game, while some hardcore Hitman fans likely refused to buy a Hitman game in chunks and preferred to wait for the complete package to be available. Either way, this may have led to quite a few people overlooking IO’s 2016 Hitman game.

Also, the game had live content released for it in the form of “Elusive Target” missions that were only available for a limited period of time during the game’s episodic release. And the inability to play these missions later likely dissuaded some from picking up the full game on disc when it was released early this year.

So it’s clear that going episodic perhaps wasn’t a wise move for a major AAA franchise like Hitman, and as a matter of fact IO recently announced that buying the complete package containing all the episodes was now the only way to purchase the latest Hitman game, in a clear move away from the episodic model.

So it’s unlikely that future Hitman games will be released episodically, at least not in the way that last year’s game came out. Actually, former studio head Hannes Seifert (who was behind the shift to an episodic format) has now left the studio, and given Hitman’s not so great sales performance last year, it’s unlikely future games in the series will be released piecemeal.

But still, now that IO has gone indie it might continue with episodic releases (the studio said last year it had two more episodic seasons of Hitman in the pipeline), although this doesn’t seem like the right course of action in order for IO to survive and become the premier AAA studio it once was.

But still, here’s hoping things turn out well for the now independent IO Interactive in its new indie adventure, and thankfully we will know more about what the Hitman creator has in store for gamers in short order, as the company will be making an announcement to reveal its future plans pretty soon.

→
Next: Watch two Microsoft guys put together an Xbox One X in this video