If one thing is clear, is that the Far Cry games have always been set in territories ravaged by conflict. Far Cry 2 took players to war-torn Africa, Far Cry 3 was set on an island taken over by pirates (and featured one of the most memorable villains in gaming), while Far Cry 4 put players in the middle of a civil war in the Himalayan country of Kyrat. But what all these games had in common was that they were set in modern times, while Ubisoft’s upcoming Far Cry Primal takes place in the Stone Age, 10,000 years ago.

And Ubisoft recently released a new trailer for Far Cry Primal (see below), which shows that no matter how beautiful the game’s land of Oros is, it is clear that this latest Far Cry will be as violent as earlier games in the series.

And early in this latest trailer, what looks like a village shaman gives a container to protagonist Takkar with human eyes floating in it, and at another point a character is violently attacked by a sabretooth tiger. Combat between tribe members is also seen, in which primitive weapons like spears are used, and at some point in the trailer the game’s protagonist is even threatened by another character with feeding him to the “Udam tribe”.

Although it is clear that the fact that the game is set in primitive times, meaning that no modern weaponry will be featured, could be its Achilles heel, the tribal warfare aspect of Far Cry Primal could certainly be interesting. 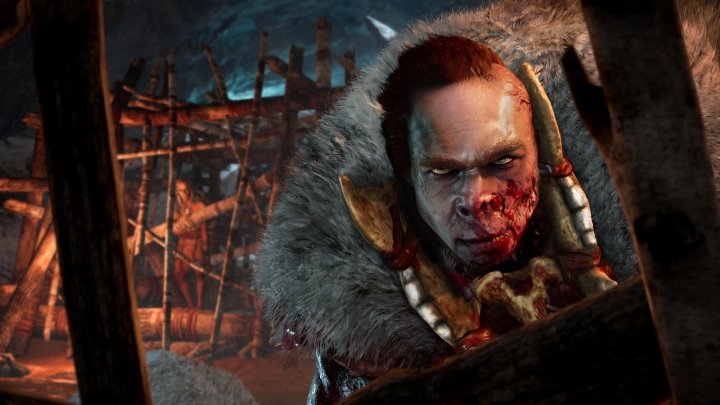 The game will feature three tribes, protagonist Takkar’s tribe, and another two tribes. According to Ubisoft : “Takkar’s people, The Wenja tribe, is at risk. They are being attacked by both the cannibals of the Udam tribe, led by the cruel warrior Ull, and the fire worshipers of the Izila tribe, led by the high priestess Batari”. And we already know that the game will explore dark and adult themes, and it is clear that cannibalism was not an unheard of thing in prehistoric times…

But the fact that Far Cry Primal features three factions instead of the usual two is certainly a novelty, as earlier games have generally pitted the player’s faction against another enemy faction. Far Cry 3 saw the natives of Rook island fighting a pirate faction led by slaver Hoyt and his henchman Vaas, while Far Cry 4 pitted the rebels of the Golden Path versus the Royal Army of dictator Pagan Min.

So having three tribes battling it out for supremacy could add an interesting dynamic to Far Cry Primal’s gameplay, adding a bit of depth and strategy as players will likely have to choose which enemy faction to attack, weighing their priorities.

And now that the game’s release date is just around the corner, and that it is likely that we won’t be getting a major Assassin’s Creed game this year, hopefully Far Cry Primal will be able to deliver the same great gameplay that the Far Cry series is renowned for.

→
Next: The Top 5 Video Game Companies Spending Money on TV Ads in 2015