French video game company Ubisoft is one of the best-known in the video game world, but it seems to be going through a rough patch lately.

This is because in a recent earnings call the company revealed that it had cancelled three unannounced games. This coupled with the delay of its Skull and Bones game led to a fall in its share price in the stock market recently, a slide of more than 10 % actually. Ubisoft shares were at their highest in summer 2018 (more than $100 US dollars) but are now slightly above $20 dollars after the most recent drop. All in all, Ubi’s shares have plummeted almost 80 % from their peak…

So the French company seems to be treading in murky waters right now, with CEO Yves Guillemot telling staff in an internal email (which was obtained by Kotaku) to “be especially careful and strategic with your spending and initiatives, to ensure we’re being as efficient and lean as possible”. Guillemot also told his people that he needed “your full energy and commitment to ensure we get back on the path to success”.

Things could get worse though, as the game cancellations mentioned earlier led to a more than $537 million US dollars write off in R&D costs. The company will also be cutting  $200 million over the next two years in costs in an attempt to get back on track, as the games industry “continues to shift towards mega-brands and everlasting live games” according to CEO Guillemot.

Of course, a company like Ubi cancelling three games (even if unannounced) is concerning, especially as this is on top of four prior cancellation last summer, including a Splinter Cell VR game.

There’s also Skull and Bones, its pirate-themed multiplayer game that’s seemingly been forever in the making, and was announced back in 2017. Its release has now been pushed to sometime in 2023. Reports of Skull and Bones troubled development and multiple delays are worrying, though, and suggest this may not end up being a hit for Ubisoft. 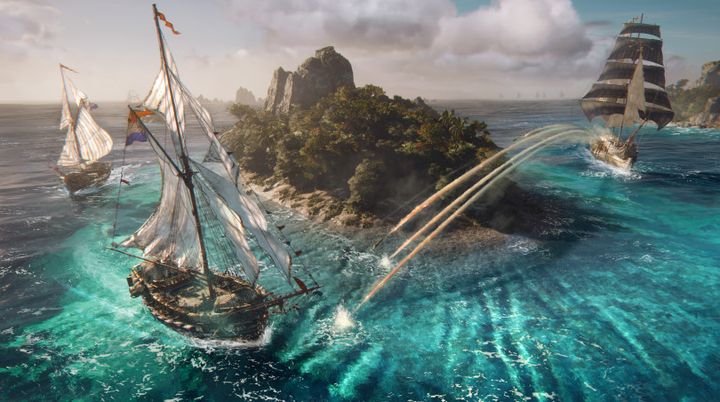 Skull and Bones has been a long time in the making, but will it come out this year?

Actually, 2022 might have turned sour for Ubisoft due to the poor sales of Mario + Rabbids Spark of Hope and Just Dance 2023, two games which scored well with the critics but which gamers did not buy in droves.

However, there might be a silver lining here, as some of Ubisoft’s upcoming games look particularly promising. There’s Avatar: Frontiers of Pandora, which has the potential to be a hit taking into account what a success James Cameron’s latest Avatar movie has been, so maybe gamers might want to pick up a game based on the movies.

Also promising is an upcoming Star Wars game by developer Massive, the people behind The Division. There’s also Assassin’s Creed Mirage, and the other Assassin’s Creed games in the works as Ubisoft’s doubles down on its most popular franchise. And Skull and Bones itself might end up being better than most people think too…

Ubisoft’s CEO Yves Guillemot said its upcoming line-up of games is “the best in Ubisoft history”. And it better be, if the iconic video game company wants to get out of the dire straits it finds itself right now.

IMAGE CREDITS
Ubisoft logo (Ubisoft Entertainment)
Skull and Bones (Ubisoft)
→
Next: This is when Oblivion remake ‘Skyblivion’ is coming out
Share this >
YOU MAY ALSO LIKE
MORE ON LAKEBIT