One of the year’s most highly-anticipated games is no doubt Ubisoft’s Far Cry 5. This is the latest instalment of the first-person action series which began back in 2004, and has quite a following worldwide. And ahead of the game’s big reveal this Friday, French video game company Ubisoft has already put out several teaser videos showing off the game’s Montana setting, and the fictional Hope County where the game’s events will take place.

Ubisoft also recently released the game’s cover art, which no doubt is as provocative as that of earlier Far Cry games. This first promotional image for the game also confirms that religious extremism and right wing militias will play a role in the game, as an earlier leak had suggested.

And it’s clear Ubisoft is not downplaying the religious angle here, as the game’s characters appear clustered around a table in a way that echoes Leonardo da Vinci’s famous “The Last Supper” painting. Plus it’s hard not to notice the badly beaten, bound up guy with the word “sinner” written on his back in the left corner of the image…

Also, we see the guy who presumably will be Far Cry 5’s main antagonist sitting at the centre of the table, in front of a modified version of the US flag and an open Bible. The symbols which appear on the flag (instead of the stars) also feature in a flag seen in the background and a banner hanging on the front of a church, suggesting this must be the insignia of whatever group players will be facing in this latest Far Cry game.

Also interesting is the fact that biplanes are seen in the top right of the image, meaning this could be the first time we get to fly these kind of aerial vehicle in a Far Cry game (Far Cry 3 had gliders, while Far Cry 4 had the buzzer, but pilotable planes have not featured in Far Cry to date). And this Far Cry game will also be set during the present day and not in an earlier time period as some had speculated, as we see piles of modern weaponry in the image including rockets and automatic weapons.

This promotional image for Far Cry 5 sure is provocative, and might end up being controversial too, as it touches subjects like religion and right wing extremism. Although it’s unlikely to cause a ruckus like Far Cry 4’s first promotional image did back in 2014. 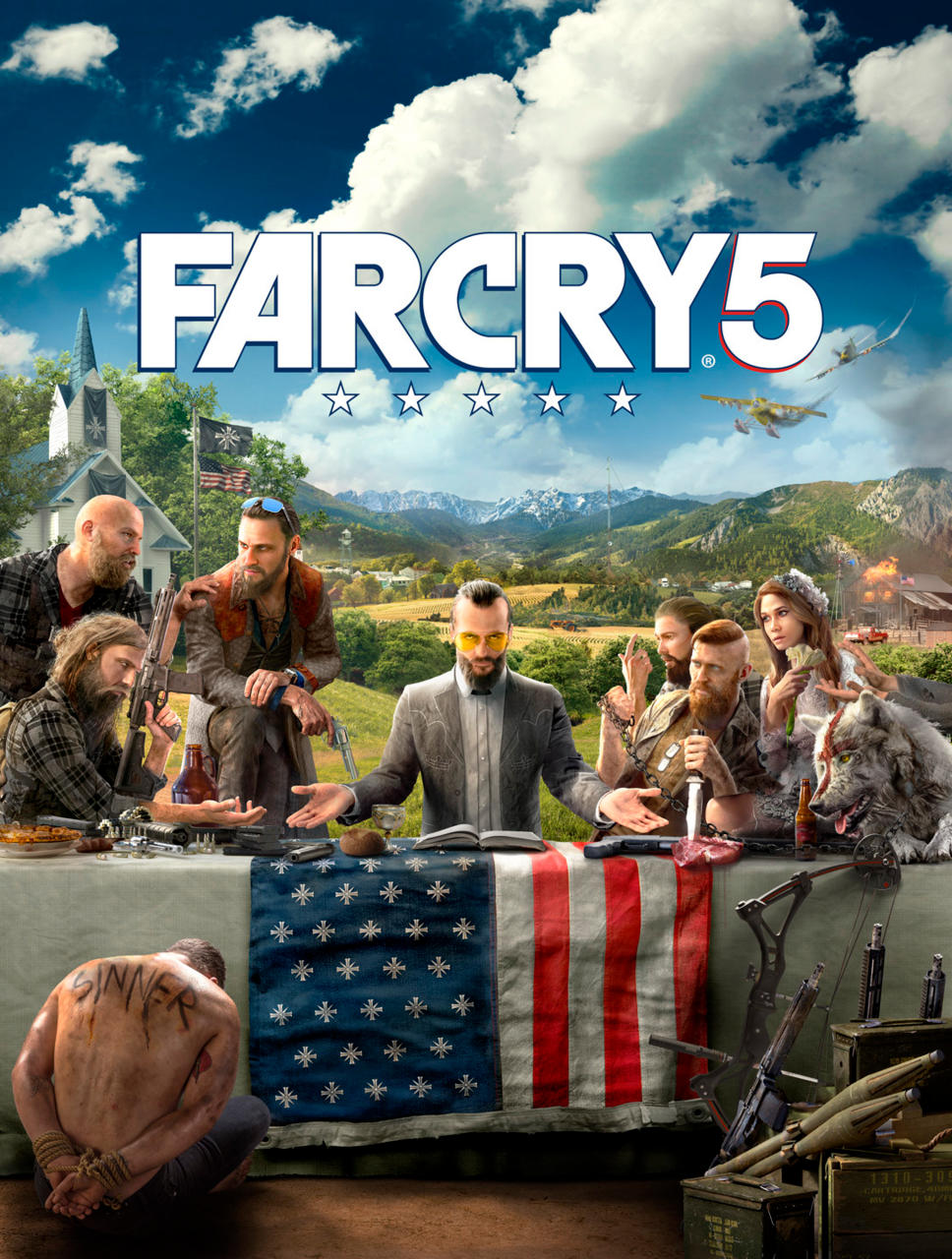 Actually, Far Cry 4’s cover art was perceived as being racist back then, as it portrayed the game’s blonde villain Pagan Min sitting in a throne with his hand on the head of a kneeling, dark-skinned native. Former Ubisoft man and creative director Alex Hutchinson had to intervene to deny the accusations back then, and Ubisoft was even forced to replace the game’s cover art with a more politically correct image.

Of course, Far Cry 5 generating controversy will be a minor issue if the game turns out to be as immersive and fun to play as the earliest instalments, especially Far Cry 3, which remains the best the series has offered to date. Although we’ll know more about the upcoming Far Cry 5 this Friday (May 26) when Ubisoft will release the first gameplay trailer for a game that could end up being one of this year’s top hits.