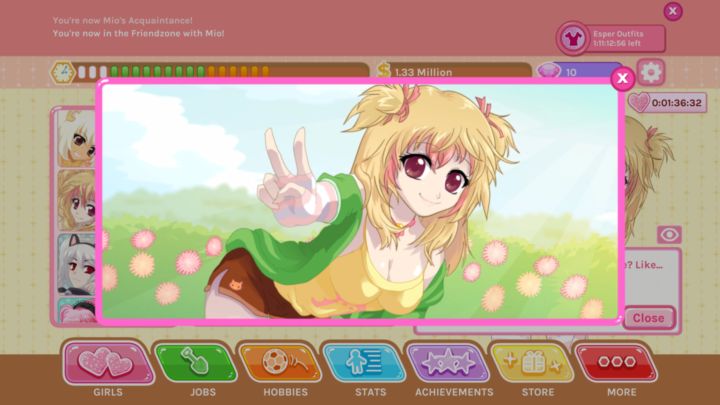 ADVERTISEMENT
Crush Crush is a dating sim, which features more than 40 female characters to unlock. Amongst the girls included in this free to play game is Cassie, which like the others has her own little story: she ends up in hospital due to your fault, but you can take your relationship with her from “frenemy” to “lover” by flirting with her, buying her gifts, taking her on dates, and impressing her by, for instance, being more badass, something you can achieve by taking up the “bow hunting” hobby. Also, taking up jobs earns you money to pay for gifts and dates.

You do all this by clicking buttons and then waiting – this is an “idle game” after all – but there’s a sense of reward as you progress here though, especially if you’re looking for the game’s more adult content involving its hentai characters, which is available via a paid add-on on Steam. Those wanting to reach “lover” status with the girls quickly in order to see them with their clothes off can also speed up progression by purchasing “diamonds”. These let you level up hobbies (and jobs) faster and also pay for dates and gifts to advance your relationship with Crush Crush’s characters more quickly, which also include a video game-obsessed girl named Mio, and a bear…