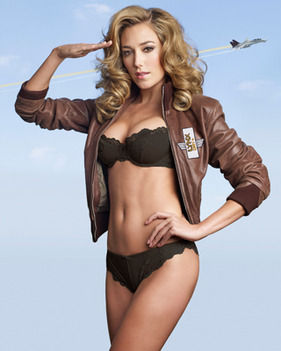 ADVERTISEMENT
You’ve probably seen English model’s Jacqui Ainsley sensual curves already, as she appeared in the opening credits for the James Bond film Die Another Day (so it seems Hale Berry wasn’t the sexiest woman featured in that movie). Apart from this, Jacqui has appeared in quite a few advertising campaigns, she even advertised a deodorant for sensitive men (which is sweet to say the least).

So it was for the best that video game studio Quantic Dreams decided to sign her on for their game Heavy Rain. She did the motion capture performance for the character of Madison Page, a journalist pursuing a mysterious killer (who is obsessed with origami). The game was universally acclaimed, and it is encouraging to see high profile models lend their good looks to video games, and hope more follow the steps of sexy Jacqui Ainsley.