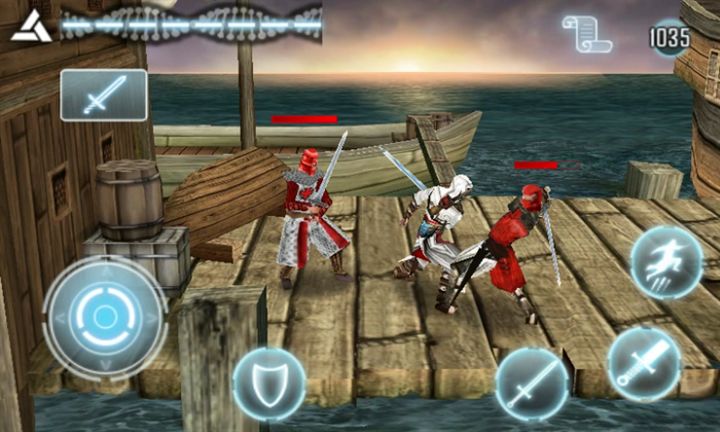 This side-scrolling, Prince of Persia-style adventure is a fun but uninspired game.

This Assassin’s Creed game was the first to hit the Nintendo DS (but was later released for other mobile devices too). It’s a prequel to the original Assassin’s Creed, but unlike the original 2007 console game, this is not a grand open-world adventure. Rather, this a linear side-scrolling game with a healthy dose of combat and some minor puzzle solving thrown in for good measure.

And aside from the fact that combat is just reduced to mindless button mashing and that the touch screen mini-games were hardly inspired, this Assassin’s Creed fails story wise. Actually, this just offered a generic Crusade-era story about a hunt for a mysterious artefact, with none of the sci-fi undertones of the console games, but was still the start of great things to come for the series though.

Came out on: iOS, Android, Nintendo DS and others. Assassin’s Creed came to handheld consoles with Bloodlines, but lacked the magic of the series.

Assassin’s Creed: Bloodlines was the first and last game in the series to hit Sony’s PlayStation Portable console. And truth be told, it does deserve credit for bringing the open-world action of the series to a handheld console, delivering a good-looking and enjoyable Assassin’s Creed adventure for mobile gaming.

But this lacked the console outings’ focus on stealth and assassinations, as the emphasis was strictly on combat here, while the joy of exploring was diminished by the fiddly camera controls. And the great storytelling of Assassin’s Creed was missing too, as this continuation of Altair’s tale had him travelling with a Templar named Maria to the island of Cyprus in an Indiana Jones-style adventure that wasn’t so interesting. The gameplay was still entertaining, though, and collecting coins to spend on upgrades was a mild diversion in what actually is a decent entry in the Assassin’s Creed saga.

Came out on: PSP.