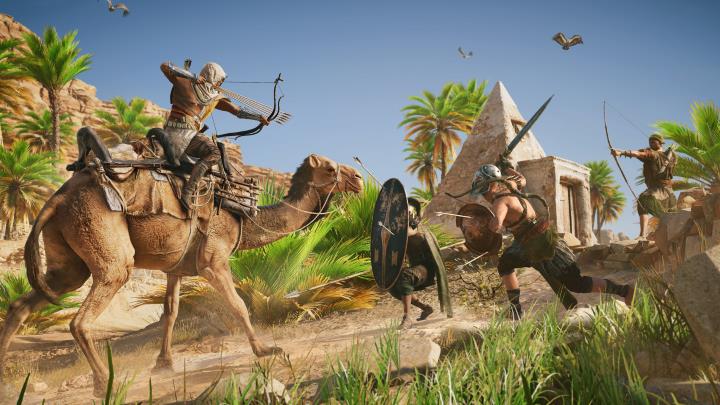 This Assassin’s Creed game is set in the land of the pyramids.

Ubisoft choose ancient Egypt for this Assassin’s Creed reboot, and it sure was a great setting. Playing as Bayek, you go to scale dunes and climb the Pyramids of Giza in this Egyptian adventure. You also got to help the sexy Cleopatra take out the Order of the Ancients – an early version of the Templar order which you got to hate early on in the game.

You see, like in the earlier Assassin’s Creeds, family tragedy is at the center of this tale. Like Ezio Auditore before him, Bayek is on a revenge mission. Bayek isn’t quite as charismatic as Ezio though. He’s more in league with Altair, the dark and serious protagonist of the first Assassin’s Creed.

The combat also got a reworking in Origins too. Enemies aren’t glued to your character, meaning you have to be mindful of distance if you want your hits connect, something which made fighting the variety of enemies more fun in this pretty great Egyptian Assassin’s Creed.